3.348 · 48 REVIEWS
Is this your company?
Forex Brokers, Crypto
CFD - Contract for Difference, MetaTrader 4, MetaTrader 5
Coinexx has acquired FinproTrading.com.
Coinexx.com is NOT related to CoinEx.com.

The FPA is informed that Coinexx.NET is an impostor site misusing Coinexx.com's logo and even contact information. 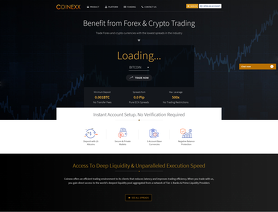 Join live discussion of Coinexx.com on our forum

Shoaib,
Pakistan,
Jan 19, 2019,
Guest
Coinexx is World No 1 Scam broker I trade in forex since 2004 I used many brokers but never lost my deposit ONLY I lost 1000 XRP when I deposit in coinexx account.
I open an account in XRP and I chat with Dave Cooper I ask him for deposit process into XRP account he sends me a mail with this detail

Please find below the XRP wallet address for deposit.

after an hour I received a full deposit detail (Address and Tag ID) and DEPOSIT INSTRUCTIONS... I received this mail from (swalker@coinexx.com)
but the fund has already gone

I am writing in response to your inquiry over chat support about making an deposit in XRP.

Please see below full details for making deposits via XRP.

DEPOSIT INSTRUCTIONS
Please do not directly deposit from an exchange or pool unless they allow you to specify a tag. If the tag is not included in your transfer, we cannot credit your account. If you deposit tokens using an incorrect tag, we will not be able to receive them and you will need to work with your provider to retrieve them.

Depositing tokens to this address other than XRP will result in your funds being lost.

Please let me know in case you have any questions.

Regards,
Sam
""""
then again I come on chat and ask him about my deposit he replies me that I have lost fund because I did not enter TAG ID when i ask him why not you give me TAG ID in the first email and he did not answer me after 2 days he calls me and asks me for more deposit but I didn't.
I have lost 1000XRP because dave send me in complete detail for deposit it is totally dave mistake but I lost my fund.
1 trader has found this review helpful

They sent my money, despite my fears.

I just completed a large (for me) transaction with coinexx.com and thought I’d pass along my experience.

About a year ago, I opened an account with Finpro trading. I guess they were based out of the UK. I started with a $3,000 and I never did take any withdrawals from this account. I was fine with them, but since I never made a withdrawal they were still unproven for me. My account steadily increased over time time and by the end of December my account equity was around $6,000. Then, right after Christmas, I got the notification that my account had suddenly been transferred to Coinexx. A real WTF moment, as there was no advance notice that this was going to happen with no options offered.

The other thing that I didn't like, was that all additions and withdrawals would be made in cryptocurrency and I had absolutely no experience with that form of money. Also, they had a continuing problem with their website getting their dashboard working properly, which didn’t seem very professional.

So, even though my account continued to grow there were several things about Coinexx that made me quite nervous. As others have said, the fact there is no address, no country, no phone number, no point of contact other than a chat and an email address, made me quite nervous. I mean, this place could disappear off the face of the Earth and what are you to do? There would be no chance of recourse. So, I decided to get set up to withdraw my funds. As I learned about how to navigate in the Bitcoin world, I first did an initial transaction and pulled $50 out of my Coinexx account, had it delivered to a newly created wallet, then sent it to a currency exchange and finally had a bit of money placed back into my personal checking account to prove I had at least a newbies grasp of the system. So far, so good.

I held on to my account for another week or two then decided it was time to ease my mind, close out, and go somewhere else. So I went to the Coinexx site and made the withdrawal for 7,000 USD to add to my crypto wallet. On the Coinexx site, they say there is a 24 to 48-hour time frame for the transaction to be approved. At the 24-hour mark, I contacted Coinexx via chat just to make sure that everything was in order and there wouldn't be any surprises. They assured me that all was right with the world. So far, so good.

So after about 36 hours passed I was pleased to find the transaction happened and the $7,000 was in my wallet. After the money showed up in my account, it took about seven or eight hours for the pending notice to go away and finally the money is there to do with as I please. So, it all was as it should be, but it was just too much of a risk for me to keep that money in there, with basically an unknown, unknowable, untraceable organization. So, as far as doing what they said they were going to do, I have to give them a thumbs up, they did come through. However, IMHO they need to spend some time establishing themselves as a real organization.

Dec 29, 2018 - No Rating On December 23, 2018 I was flabbergasted to learn that my account with FinPro would be changed to Coinexx. I had been with FinPro for about 10 months and had never made any withdrawals, but things seemed right with them. They did answer questions promptly.

There are two alarming parts to this change. First, there was no advance warning from either FinPro or Coinexx, the move just happened. I think that any upright company would provide plenty of notice to a customer that their firm was being acquired by another and offer the chance to cash out. Second, apparently Coinexx only conducts transactions in Bitcoin and other crypto currencies. This is very distressing to me as I have absolutely no experience with Bitcoin, and I really wasn't interested in participating in it. I simply wanted a broker to accept USD and to pay my withdrawals in USD. At this point, I am undecided about the course to take and I am extremely concerned about the safety of my funds.

They look like a good company, trading consts are very low, withdrawals smooth, support ready to help. So far Im satisfied with them.

A nice sales pitch. But Sam.. who is the fraud behind the manipulated prices.. a nice show of .2 and .3 with average server response time of 790ms this a fraud of a broker from every angle. DO NOT use them by any means!

Do NOT use them!!
1 trader has found this review helpful

Coinexx is a lame broker who could be a great broker but isn't, hence the 2 star rating. I'm no stranger to forex brokers and have had live accounts with over 10 and traded for thousands of hours. I like that they are wanting to make a name for themselves by focusing on crypto, they have good spreads and micro contracts on cfd's.

What I don't like is that they are greedy bastards who are running the dreaded Virtual Broker plugin. There is a delay in execution time, the platform disconnects (while my other broker is still connected), you click on a price and often it's a pip difference the price that you get. For someone who trades regularly its very obvious the manipulation.

The service was better before when it was Finpro. And from what I can tell its the same guy running it. F*** your greedy virtual broker plugin. The odds are all ready stacked against the little guy. I'll stick with some of my other brokers.
1 trader has found this review helpful

Ive been trading for about 7 years now, with many brokers. Coinexx, FXCM, and Oanda are the only brokers who did not ever hassle me when its time to withdraw.
In fact it was easiest with coinexx, because its self service online, you dont have to fill out all this paperwork and run around with red tape. This was my experience as of 2018 withdrawing $2000 in 3 days turnaround. The times I was on chat, they were helpful.

By far the easiest broker to trade with! everything from beginning to withdrawals is seamless. signed up with them within minutes. the deposit setup is auto, didn't have to run around asking support guys what to do where to send funds etc. and love the fact they accept almost all mainstream crypto coins. have deposited in one coin and withdrawn in another, no issues with that as well and the conversion/transaction fees are by far the best with them. Had tried a crypto deposit with another broker but coinexx stands tall in terms of how clean the deposit went through and the fees. Coming to withdrawals, again easy no issues withdrawing at all. have don,t 10k of withdrawals so far. easy and no restrictions.

Have traded with them during normal and news times and the execution and spreads have been consistent. What else to ask for in a broker. Def recommended and never experienced any shady suspicious practices since started trading with them. Though they don,t need a support team cos everything is self serve but the guys behind the support are well informed!

A broker you can trust. Was with finpro when my account was moved to them. Traded with them for a few days but out of panic requested a withdrawal and received it well in time. But it was only after i moved to another broker i realised its really hard to match the conditions & services finpro now coinexx provides. Trading with them without any dramas

grndcomm,
North Carolina, USA,
Feb 23, 2019,
Registered user
I was client of Finpro Trading and now am with Coinexx. So far I have only one complaint and that is that they do no wire transfers (as Finpro Trading did). They use the dreaded Bitcoin for withdrawals. Coinbase is going to get their commission which is much higher than my previous bank wire fee ($16). Add to that the value of a bitcoin may work either for or against me, I can easily lose a $100 on a $3000 withdrawal. Only made 2 withdrawals so far and both times bitcoin value went against me. I am in US and may look for another broker due to the withdrawal policy of Coinexx.
Sort by:
Show: