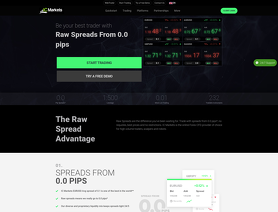 January-February 2015:  A large number of suspicious and fake positive reviews have been submitted for IC Markets.

Join live discussion of ICMarkets.com on our forum

The best broker for me and I tried many.

I use IC Markets for many years, very satisfied with ECN account and also with always best support. I highly recommend to go with their ECN account (called RAW spread account recently) to get lowest spreads too.

Although I recently started trading with IC markets, but the experience so far has been great. Haven't noticed any suspicious behavior so far. very impressive spreads too, and the customer service is also very helpful.
The journey so far has been smooth

I have been using their services for 2 months and I am generally very happy. They offer very good conditions and their support is great and responsive.

I m old trader. With ic markets more than 5 years
. True ecn broker.. no manuplating but they need to work on deposit and withdrawal options and give bonus to encourage deposits.. customer service is friendly and helpful.. I really appreciate to trade with them

I like their Customer Service a lot, they response very fast. Very smooth in withdrawal and deposit. Nice platform.
1 trader has found this review helpful

Never had any trouble, when u have a question there's fast responds of the live support. Not to much spread and still haven't experienced price manipulation!

I have never had any problem with the broker,
totally serious and one of the best spreads
especially for exotics USDMXN

I've never had a problem withdrawing.

IC MARKETS IS A GREAT AND GENUINE BROKER WITH 24/7 SUOPPORT AVAILABLE.

IC MARKETS IS A GREAT BROKER, I HAVE BEEN WITH THEM FOR A WHILE NOW AND WITHDRAWALS REQUESTS ARE COMPLETED WITHIN ONE DAY. THEIR CUSTOMER SERVICE TEAM IS ALWAYS AVAILABLE AND WILLING TO HELP. TO RESOLVE ALL ISSUES. OVERALL THEY GIVE A GREAT EXPERIENCE.

I've tried many other brokers and ICMarkets is definitely the best one.
Also the customer service is excellent and super fast.

the site obscured by Consob is accused of financial abusiveness

Feb 12, 2019 - 1 Star I fully support that Ic Markets deactivate the servers so as not to allow Take Profits and Stop Losses to be hit or when the positions are in net profit or they do not want to allow the closing in profit.


After I sent a complaint to the FOS I was contacted by a certain Andrea Farleburle (from an anonymous telephone number), who told me that he was directly appointed by the general manager Angus Walker to get in touch with me to understand my situation.

Because my original account manager (Nicola Fanigliulo) was in Cyprus where they have an office(to be clarified with the broker) and the management of my account was assigned to CYPRUS and they had no knowledge of what had happened there before.

I should have had the RIGHT,when I opened the account, to KNOW that the broker also had a seat / office in that jurisdiction,while I was never informed about it but also was created an AUSTRALIAN VOIP number to avoid the fact that he was contacting me from CYPRUS and making me visualize instead of being called from Australia.

If I had known from the opening of the account that my money was being handled in that jurisdiction I would not have thought to operate with their platform (considering that I had chosen to work with them because they had guaranteed to operate 100% in Australia and that I was contacted by this jurisdiction).

I tried to close the positions on 17/06/2018 with a loss of about € 480000.00 finding the same problematic server disconnected/deactivated


I have asked Icm to give me the logs of their servers but i still awaiting receipt.

I suspected that something Unfair happened in Cyprus otherwise the Logs would have already been sent to me, I hope you will succeed in obtaining them.


IMPORTANT NOTE: (I want to clarify that my problem has been reported by other reliable and verifiable people on this forum,

When I told Nicola Fanigliulo and Andrea Farleburle (the company's account manager) that i have discovered this forum, after two days the forum's people who had reported issues or had my similar situation were immediately reimbursed by IC MARKETS and they were asked to delete the negative review to insert a positive one, only after that they would have received the reimbursement, (I have correspondence with a forum user who provided me with such proof).

All this casually happened after communicating to Andrea Farleburle and Nicola Fanigliulo that my problem was not a single chance but an attitude reported by many other people to whom I have recommended to make a complaint to Fos with me.

1 trader has found this review helpful
Sort by:
Show:

👉 What is the minimum deposit for IC Markets?

​IC Markets minimum deposit is $200 for all available account types.

👉 Is IC Markets a good broker?

The the best way to answer if IC Markets is a good broker is to read the unbiased traders reviews on Forex Peace Army. https://www.forexpeacearmy.com/forex-reviews/8264/icmarkets-forex-brokers.

IC Markets does not offer Negative Balance Protection and your loss may exceed your account balance.

However, to try to protect you from situations like this, IC Markets accounts have stop-out level set at 50%.

This means that when margin falls below this level the system will start closing positions automatically.

In nearly all cases this should prevent the account balance going negative.

👉 Where is IC Market based and where are its servers located?

IC Markets Trading servers are located at the Equinix data centers in New York and London also known as home of multiple exchanges and trading platforms.