Welcome to our monthly briefing, where we comment on the most important events in the cryptocurrency sector with a focus on Bitcoin, analyzing them, and speculating on their possible impact, as well as on what to expect in the long-term.

We should begin by clarifying that our analysis is centered mostly on the prevailing sentiment rather than on fundamentals per se. This is common in any discussion of cryptocurrencies, due to the specific features and qualities of these assets.

We will attempt to assess the positive and negative factors driving the market to determine which appear stronger at the moment.

At first glance, finding something positive appears challenging at this time. Bitcoin has lost more than 80% of its market capitalization, and the overall sentiment is a far cry from the euphoria of less than one year ago. Nevertheless, things are not as bad as they look.

Our analysis shows two strong factors, which have the potential of drastically changing the situation. Since they are long-term, we should not expect to see results soon – on the other hand, the fact that they are long-term bolsters our confidence that they could dramatically shift the market to a positive direction.

The first factor is robust activity in the crypto sphere by massive financial entities. “Whales” such as Fidelity, NASDAQ, ICE, Goldman Sachs, and Morgan Stanley would not be getting involved if they did not see potential, especially since they are all turning toward crypto at the same time. They intend to enter the crypto market in 2019. Since this is likely to change the situation dramatically, the price of Bitcoin is expected to rise sharply again, according to many well-known experts, such as Thomas Lee, the founder of the Fundstrat, and head of Galaxy Digital Mike Novogratz among others.

But let’s start with the facts before we provide our analysis:

Why such anticipation for the big banks to enter the crypto market? The most important consideration is the influx of new, big money, which would bring substantial liquidity to the sector. Here are some statements and comments on this topic:

Lee attributed the recent crypto market collapse to the following three events: Bitcoin Cash’s (BCH) contentious hard fork, the regulatory actions of the Securities and Exchange Commission (SEC) forcing Initial Coin Offerings (ICOs) to return funds to investors, and the “terrible” condition of global markets, which have dropped by approximately 10% in October and November. “[We] have a price correction taking place, which has caused the price to fall even below its 200-day [a popular technical indicator used by investors to analyze price trends], but if you’ve got time, it will rise. It will not happen within three months, or one year, but in two to three years, and this is the golden time to be in crypto. As soon as Bitcoin crosses its 200-day, we know there will be a flood of money coming. […] The only time the return is better than 7% is when you buy at a bear market […] Bitcoin may have downsides in the near term, but this doesn’t change the fact we are still in the earliest days of crypto, and it’s about to become an emerging asset class.”

According to Lee’s BlockShow speech, at present, crypto has only 50 million active wallets in contrast to the 254 million PayPal accounts in Q3 2018, and the 4.6 billion Visa and MasterCard accounts. Comparing Bitcoin to other payment systems in terms of social network value, Lee estimated that, in ten years, Bitcoin might be worth $10 million per coin.

The second factor that promises a dramatic upswing in the long-term is the change in the market’s structure. Major drops of Bitcoin are taking place because of a massive restructuring of the market’s framework, of the algorithms that it works on, of the implementation of regulation, and so on. When the restructuring is over, a new upside cycle should start. At first glance, regulation creates negative moments, especially when the SEC intrudes, but this is a time of purification and evolution. Although the crypto market may cease to be the “Wild West” it has been thus far, it would certainly benefit from improving its approach to clients and from ensuring the safety of their money and transfers.

Let’s take a look at the facts: 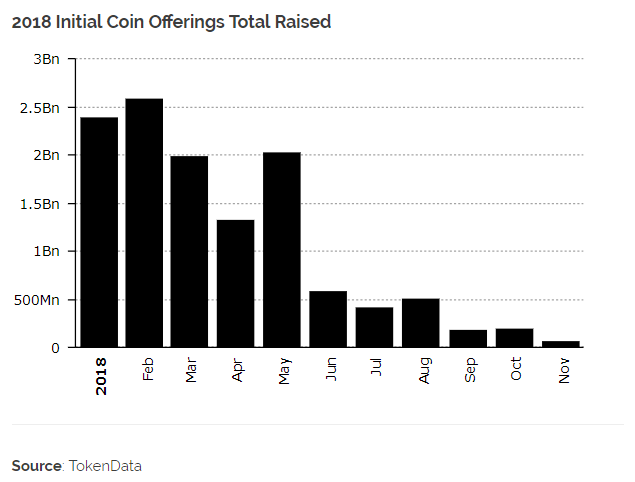 So what do we have on the negative side? In a nutshell, the overall market drop and its impact on mining, the waning popularity of ICOs, hacking attacks, and the issues that the SEC is combating, as well as the short-term consequences of their actions. We should point out that, with the exception of SEC action, all other factors are mostly technical and certainly not new.

Let’s have a closer look:

Synthesizing all the above, we see two game-changing factors on the horizon for the cryptocurrency market: the widespread infusion of institutional capital and regulation.

As regards to the first factor, the process will be slow but, since it’s already underway, there is no reason why it should not continue. Once the ‘invasion’ of the market by major world exchanges and transnational banks begins, that will become the status quo. Such entities do not undertake investment sporadically or on a whim. They keep their noses to the wind and, the moment they smell money, they follow the scent.

What is more, the activity of big banks in this sphere answers the important question: What is the crypto phenomenon? Is it is an emerging market and a new asset class in the long-term, or a short-lived, modern curio? From where we stand at the moment, it’s quite clear that the former is a more accurate assessment than the latter. It also entails that somehow, perhaps slowly but on an ongoing basis, big investors will enter the market, thereby suggesting an upward market retracement within a year.

The second game-changing factor is regulation – a double-edged sword that will likely shift market participant demographics. The “Wild West” Bitcoin market is disappearing, replaced by the pragmatic features of exchange-traded products.

All the negative moments discussed in this briefing are short-term and mostly a result of technical growing pains common to the development of any new market. Issues like hacking attacks, drop in mining activity, and vulnerabilities in blockchain protocols, have to do with infrastructure nuances at this early development stage. With the advent of government regulation, some of the unique features of this new technology will likely be relegated to paper, in other words, they will there in theory but not in practice.

Without a doubt, regulation will bring centralization, safety, and strict controls. Bitcoin and the blockchain will lose decentralization and user-anonymity for the most part when 80% of trading is made through major exchanges or big banks by institutional or large investors. Then again, hacking attacks should decrease because it will become more difficult to steal coins from NASDAQ or ICE accounts. Moreover, the SEC will have a hand in everything, regulating ICOs and other processes.

In other words, Bitcoin will gradually become similar to traditional futures or commodities. Where will this lead the market? To a massive change in the participant contingent, we believe – those who need/want anonymity and decentralization will begin exiting the market or using the services of small agents. With that said, many criminal spheres utilize these features. However, mainstream small investors and traders who don’t care about those features may even see improvement by increased safety and liquidity in the market.

What is the bottom line? Our opinion that the market is very close to comeback is aligned with the assessment of Civic CEO Vinny Lingham, who predicted that Bitcoin would be in the $3-5K range in the next 3-6 months. In an interview with CNBC, he said that BTC’s exchange rate is unlikely to drop below the $3K area, since this is the active purchase range; however, if the bearish cycle does not end in the next one or two quarters, BTC may not be able to maintain this level and drop sharply in price.

Currently, we see a culmination point for Bitcoin investment, a kind of “pain or gain” situation. Our all-time low targets stand at $2900 and $1800 correspondingly. Buying around $3K brings the best risk/reward ratio. While it is safer to buy at $6K after the upside action has begun, the price will be less attractive. Considering the background that we see at present, the total destruction of cryptocurrencies is hardly a possibility. Even if we consider a drop to the $1,800-$2,900 range, investment at the current levels is still a good long-term strategy.

A simple comparison of 2014 and 2018 price action reveals similarities and suggests an analogous price action for 2018-2019; this assumes a final drop to $1,800 before the true rise from the ashes begins. 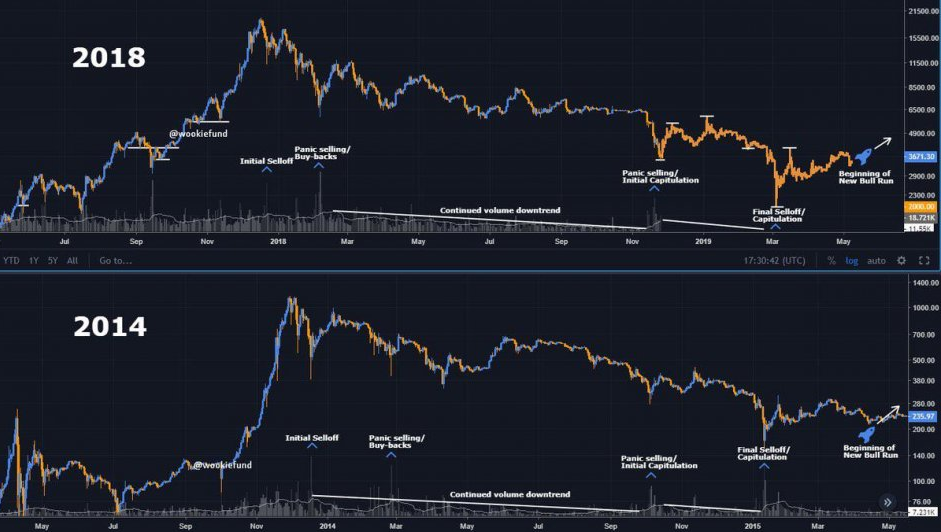