Previous two reports we’ve dedicated to the changing market sentiment, and right in time have shown that splash of positivity in October was mostly emotional and had no foundation. November month has confirmed our conclusion.

We suggest that market makes big mistake, trying to look at cryptocurrencies with “old eyes”, segregating it from global economical events, trying to follow “ideal” and too optimistic, if not to say naive, look that crypto currencies are independent, unique by its nature, suggesting that they are not affected by strict rules of global economy.

Through the whole 2022 we’ve shown that it is not so. In fact, every time we’ve made correct conclusions when we put Fed policy analysis as a background of our view. And Central banks’ steps remain the key to understanding of BTC performance in the future.

In December, investors were so frustrated with FTX drama that now they are too pessimistic, loosing last faith in future of cryptocurrencies, suggesting that “everything is bad” or even “everything is lost”. But, once again, detailed look at recent Fed meeting of 16th of December tells that not necessary it will be so negative as market suggests now. Yes, we also think that until March-April 2023 situation hardly will change, but drastic turn could happen closer to the summer. And this time everything will depend only from BTC inner power, whether it will be able to change investors’ mind, perception, sentiment etc., and finally to change the downside tendency …

Bitcoin dropped back below $17,000 and several smaller cryptocurrencies referred to as altcoins posted significantly steeper declines as concern increases that the digital-asset market’s woes are far from over.

The largest token dropped as much as 3.7% to $16,762 on Friday. Earlier in the week, Bitcoin reached its highest price since Sam Bankman-Fried’s crypto empire filed for bankruptcy last month. On Friday, Ether declined as much as 6.3%, while other altcoins like Avalanche and Solana dropped as well.

Cryptocurrencies dipped alongside US stocks as the economy weathers the Federal Reserve’s aggressive tightening. The drop reverses a brief relief rally that pared back some of the token’s November losses. Since the start of the year, Bitcoin has declined roughly 65%.

Fairlead Strategies Senior Analyst Will Tamplin said that the token is at risk of re-approaching its November lows. Then, it sank to its lowest price since November 2020. 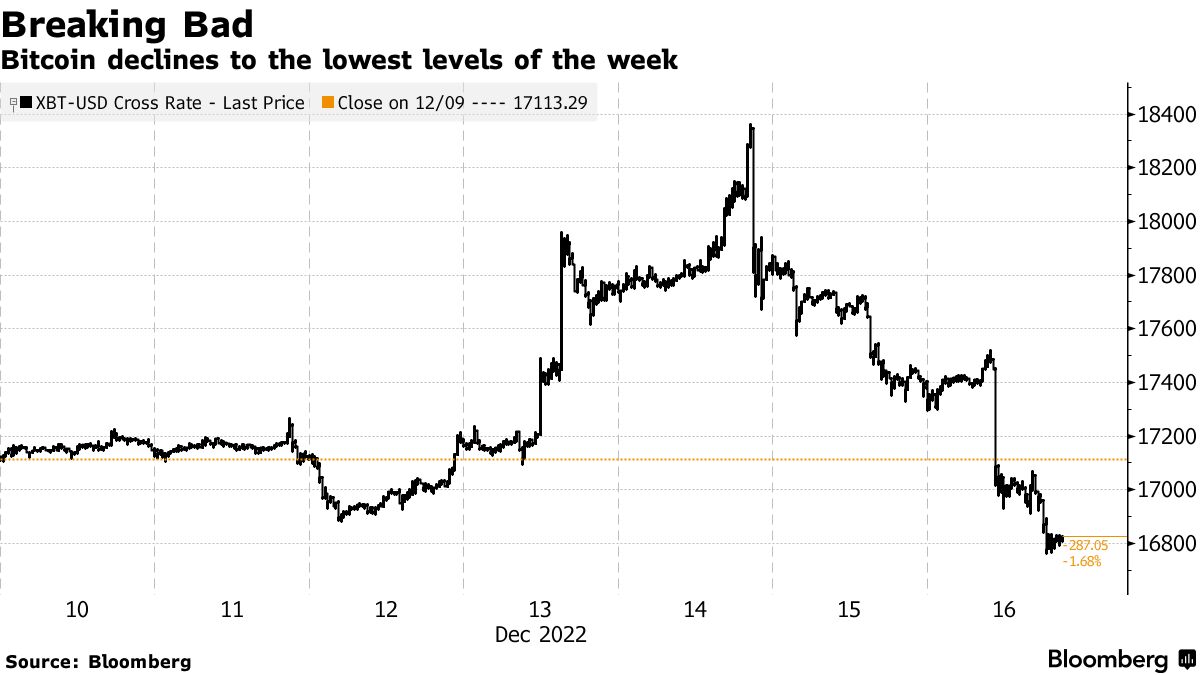 Noelle Acheson, author of the of the “Crypto is Macro Now” newsletter, wrote that investors remain skittish about the fates of other crypto-related companies, including Binance Holdings Ltd. and Digital Currency Group, parent company of troubled crypto broker Genesis. Binance’s BNB token was down 6.3% on Friday, and has slumped about 50% in the past year. 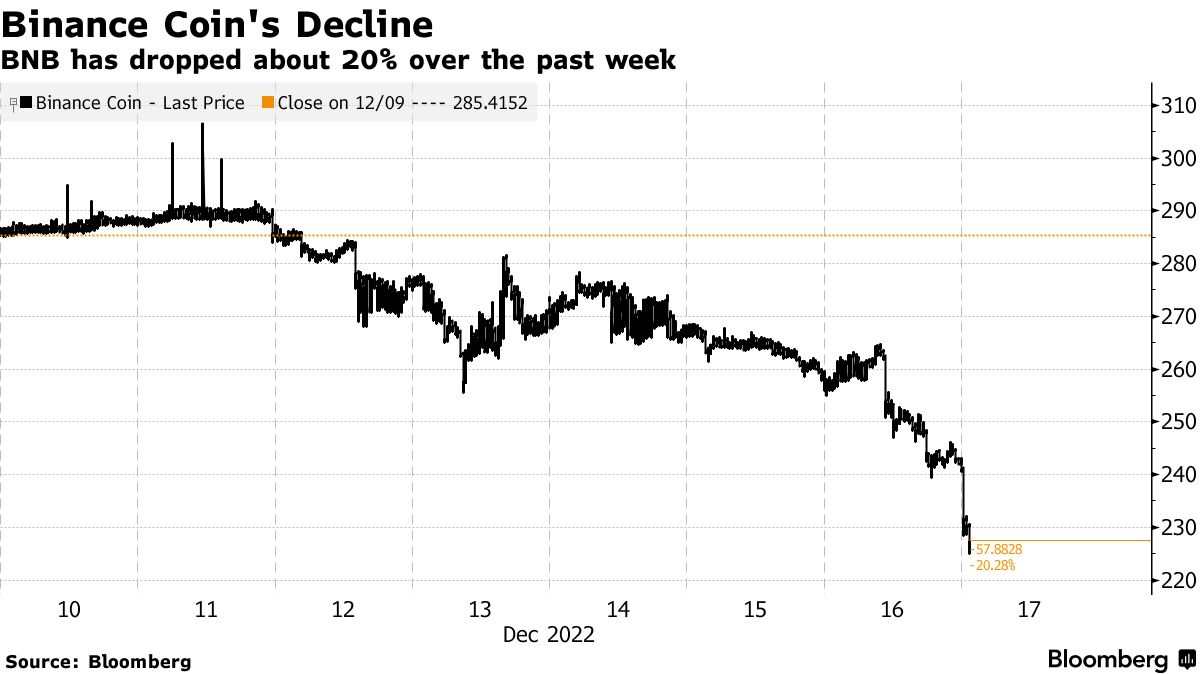 “There may be some ugly contagion news yet to drop,” Acheson wrote. “But most investors who were going to sell have done so.”

Shares of companies tied to the digital-asset world continued to be under pressure. Coinbase Global Inc., fell as much as 9% to $34.71, another all-time low. The shares of the biggest US crypto exchange have tumbled 85%. Bitcoin miners Marathon Digital fell almost 85, while Riot Blockchain dropped 6%. They’re down 88% and 83%, respectively, since last December.

“We expect a re-test of the November lows, near $15,600, in the coming weeks” after a failed test of levels in the $17,000 to $18,000 range, said Katie Stockton, founder of Fairlead Strategies LLC. “We ultimately expect Bitcoin to make a lower low, increasing risk to long-term support near $13,900.”

Binance Holdings Ltd., the dominant cryptocurrency exchange, has been hit by large outflows as traders move to take custody of their tokens amid revelations that rival FTX may have misused customer funds before its November implosion.

Net outflows of digital tokens from Binance amounted to about $3.7 billion in the past week, including almost $2 billion in 24 hours, according to data from research firm Nansen . The one-day number was nearly 18 times higher than the next largest outflow, which was from Bitfinex.

“The flows are still relatively small considering Binance’s reserves,” said Alex Svanevik, chief executive officer at Nansen, referring to Binance’s recent outflows. “But given everything that’s happened, it’s not surprising many are choosing a cautious approach.”

Binance temporarily halted withdrawals of stablecoin USDC on Tuesday because it couldn’t process those transactions until its banks in the US opened, Zhao said in a tweet. “We expect the situation will be restored when the banks open,” he tweeted.

Last week, the exchange released a proof of reserves report. The document, based on a snapshot review by accounting firm Mazars, shows the exchange having sufficient crypto assets to balance its total platform liabilities.

But the report also acknowledges limitations, as it didn’t amount to a true financial statement audit that would have given a clearer picture of Binance’s overall health.

The crypto industry remains mired in a deep downturn after a $2 trillion rout in digital assets over the past year. The slide has been pockmarked with a series of blowups of which FTX, once valued at $32 billion, was perhaps the most damaging.

Now that Sam Bankman-Fried’s fall from grace is complete, uneasiness is growing around the dominance that his rival Changpeng Zhao’s Binance holds in the cryptocurrency market.

The worries surfaced again as the accounting firm Mazars Group halted work for Binance and other crypto firms on reports that are meant to demonstrate that the companies hold the necessary reserves needed to cover any potential surge of customer withdrawals.

Mazars’ move threatens to cloud an accounting picture many already found opaque — indeed it was likely the market’s lack of reassurance from Mazars’ “proof-of-reserves” reports that led the firm to halt all such work. A televised appearance earlier in the week in which CZ was peppered with questions about Binance’s financial strength gave critics grist for another round of heckling.

Weakness in crypto prices that followed headlines about CZ’s company this week reinforce concern that Binance has become a “too big to fail” player in a market where, unlike traditional finance, there’s no one to stop a potential failure, offer a bailout or soothe any contagion.

“I don’t think Binance is trying to cause problems, but that organization is now a risk to all of us,” said Mark Lurie, the chief executive officer and co-founder of Shipyard Software, a developer of decentralized exchanges. “Anytime you have one player controlling substantial amount of volume, there’s a lot of systematic risks.”

The Binance spokesperson said the exchange is exploring how it might provide additional transparency to show users their assets exist on the blockchain, and is seeking another accounting firm to work with it to show proof of its reserves. That may prove difficult: Late Friday, the Wall Street Journal reported that BDO, which recently vouched for stablecoin giant Tether’s reserves, was reconsidering its work for crypto companies.

Bloomberg reported last year that Binance is being probed for money laundering and tax offenses by the Justice Department and Internal Revenue Service. Chainalysis Inc., a blockchain forensics firm whose clients include U.S. federal agencies, concluded in 2020 that among transactions that it examined, more funds tied to criminal activity flowed through Binance than any other crypto exchange.

Cryptocurrencies were mostly lower as the risk of further contagion continues to weigh on investor sentiment a month after Sam Bankman-Fried’s FTX exchange sought bankruptcy protection.

“I would expect us to continue to stay range-bound until the new year,” wrote Aya Kantorovich, former head of institutional coverage at FalconX.

Instead of expanding crypto portfolios, clients have unwound and hedged their crypto exposures, which Kantorovich said has pushed down open interest in Bitcoin and Ethereum. Bitcoin dropped 16% in November, its largest monthly decline since June.

Kantorovich added that she expects funds to “re-deploy into the space in January,” and wrote that crypto markets may be hitting a bottom.

Crypto trading firm Cumberland also said it does not “expect this paradigm to last,” given consolidating price action.

Money managers who have avoided the many ups and downs of cryptocurrencies may be feeling relieved for having done so, according to a senior investment strategist at JPMorgan Asset Management.

“As an asset class, crypto is effectively nonexistent for most large institutional investors,” Jared Gross, head of institutional portfolio strategy at the bank, said on this week’s episode of Bloomberg’s “What Goes Up” podcast. “The volatility is too high, the lack of an intrinsic return that you can point to makes it very challenging.”

In the past, there used to be some hope that Bitcoin could be a form of digital gold or haven asset that could provide inflation protection. But it is “self-evident” that hasn’t really happened, Gross said.

“Most institutional investors probably are breathing a sigh of relief that they didn’t jump into that market and are probably not going to be doing so anytime soon.”

Speculators cleaving to the view that the crypto rout is mostly over are at risk of a rude awakening in 2023, according to Standard Chartered.

A further Bitcoin plunge of about 70% to $5,000 next year is among the “surprise” scenarios that markets may be “under-pricing,” the bank’s Global Head of Research Eric Robertsen wrote in a note on Sunday.

Demand could switch from Bitcoin as a digital version of gold to the real thing, spurring to a 30% rally in the yellow metal, Robertsen also said.

This possible outcome involves a reversal in interest-rate hikes as economies struggle and more crypto “bankruptcies and a collapse in investor confidence in digital assets,” Robertsen added.

He stressed that he wasn’t making predictions but instead adumbrating scenarios that are materially outside of current market consensus.