The Elliot wave theory was developed by an experienced accountant named Ralph Nelson Elliot in the 1930s. After digging through decades of financial data, he discovered that the markets, which were thought to move in a disordered and unpredictable manner, actually didn’t.

According to him, the financial markets move in repetitive cycles, which are largely influenced by the collective psychology of traders. Elliot called the upward and downward swings, which yield the repetitive patterns, “waves”.

Elliot advanced the idea that if traders can properly identify these repetitive patterns, then they can profitably forecast the subsequent market direction.

This is what makes the Elliot wave theory interesting to many forex traders.

The key objective of any trading strategy is to assist traders in correctly identifying possible market turning places, either highs for placing short orders or lows for placing long orders.

The main advantage of the Elliot wave theory is that it plays a critical role in assisting traders discover potential market reversal points.

If you can determine where a currency pair is likely to form a top or bottom, then placing profitable buy or sell orders will be much easier.

By correctly determining the repeating cycles in the prices of currency pairs, you can confidently forecast their next direction, and gather profits along the way.

On the other hand, a main disadvantage of the Elliot wave theory is that it tends to be very subjective, something that makes pinpointing the start and end of the repetitive patterns difficult.

However, with some practice and commitment, you can improve your skills at identifying these patterns. Remember, “Nothing good comes easy”.

The Elliot wave theory holds that the market will move in what is referred to as a five and three-wave pattern in any trading timeframe.

Broadly speaking, the 8-wave pattern can be divided into two sections:

In a bullish market, the Elliot waves would look like the following: 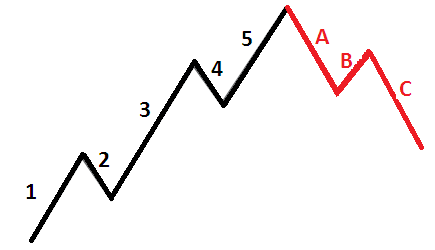 In a bearish market, the Elliot waves would look like the following: 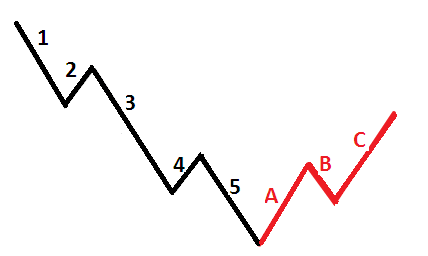 An important aspect of Elliot waves is that the repetitive patterns are fractals. In other words, every bigger wave is composed of smaller sub-waves.

a) The impulse period

Here are how the waves in the impulse period could be formed during an uptrend:

You might be contemplating: “How can I be sure that an actual Elliot wave pattern has formed?”. If you are doubting, here are the three main rules to look for in the impulse period:

In most cases, wave 2 and wave 4 tend to make alternate patterns. For instance, if wave 2 moves sharply, then wave 4 can just make some mild movements. Wave 4 can also make sharp moves while wave 2 makes mild ones.

a) The corrective period

If the overall market trend is bullish, then a bearish correction will be seen, and vice versa. Letters A, B, and C are utilized, rather than numbers, to identify the corrective waves.

There are three major types of wave patterns in the corrective period.

The zig zag correction pattern is normally the simplest and the easiest wave sequence to identify. It represents quick price movements that are contrary to the main market trend.

Here is a diagram that illustrates the sub-divisions of the zig zag pattern. 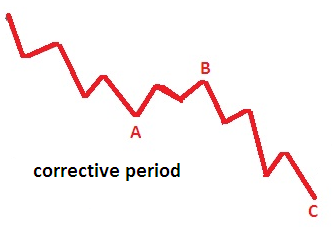 In the flat pattern, the corrective waves appear sideways. In most cases, these waves have about the same lengths.

In this pattern, the corrective waves are sandwiched by two trendlines, leading to the formation of a “triangle”.

Depending on the price action, the trendlines can either be converging or diverging. Usually, triangles are constituted by 5 waves that travel against the trend in a sideways fashion.

There are different types of triangles, including:

Here is an example of a symmetrical triangle formation in a bullish market. 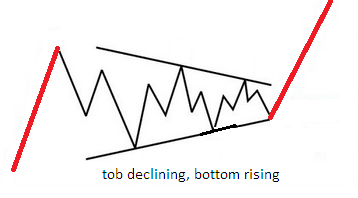 The forex market is usually not symmetrical, and it can be difficult to determine if an Elliot wave has been formed. Therefore, the Elliot wave principle can be combined with other strategies to improve the identification of profitable trading opportunities.

If other indicators are incorporated, making analysis becomes easier. Some of the strategies and indicators that can be used include support and resistance levels, Fibonacci indicator, Stochastic indicator, RSI indicator, and moving averages.

Here, we are going to talk about how the Fibonacci tool can be used together with the Elliot wave theory to increase the chances of success.

Fibonacci is a popular indicator used to identify market retracement levels. It is available on the MetaTrader platform. If you stretch the tool between a low and high point on a chart, it will mark the likely retracement levels for your chosen currency pair.

The most commonly used Fibonacci retracement levels are:

When using the Elliot wave principle for trading, the Fibonacci levels can assist you to identify the tops or bottoms of smaller waves, and even the bigger impulsive and corrective waves.

Here is an example of a daily chart of USD/JPY. 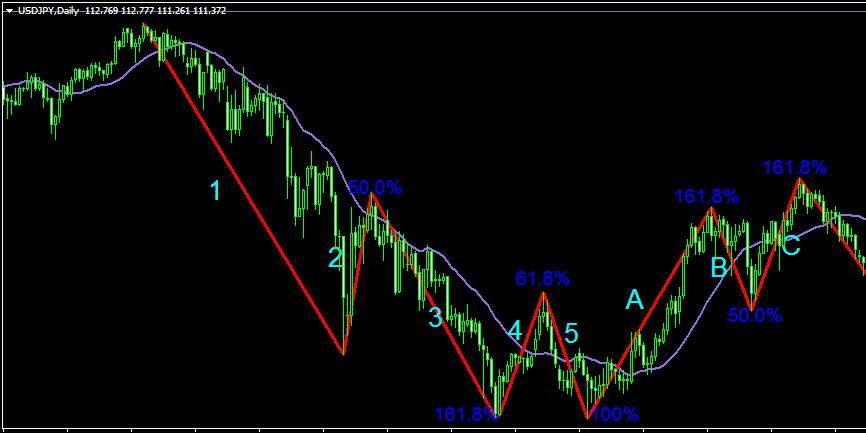 On the chart, the Elliot waves have been marked using trendlines. The Fibonacci levels are also marked. A simple moving average is also plotted to give an impression of the market trend.

Here is a description of what could be happening on the currency pair.

The best places to trade the Elliot wave pattern are:

As earlier mentioned, wave 3 is the strongest and offers the most lucrative trade opportunities in the Elliot wave setup.

To correctly spot wave 3, you should first ensure that wave 1 forms in the direction of the emerging trend. Consequently, wait for a corrective wave to form, wave 2, which should retrace by 38.2%, 50.0%, or 61.8% of the initial wave. Correctly spotting these two waves will assist you in identifying the start of wave 3.

Wave 5 also presents a nice place for placing orders. It’s important to note that wave 5 usually attains between 50.0% and 161.8% of the length of wave 4. Furthermore, usually, it’s length is the same as wave 1.

Wave 3 and wave 5 offer lucrative trading opportunities because both are aligned with the predominant market trend. And, in the forex market, the trend is always your friend. Yeah?

Although the trending moves create two corrections, they are usually more difficult to trade and offer minimal profit potentials.

After the culmination of the impulse period, which ends with wave 5, you can expect to see the three waves of the corrective period.

In this period, wave C offers the most profitable trading opportunity. Just like wave 3, wave C is the strongest wave in the corrective period.

To trade it, you can wait for wave B to complete forming (by retracing 50-61.8% of wave A), and then jump into the emerging C movement.

The Elliot wave theory is a powerful strategy you can add to your trading arsenal. If you can master how to use it in the messy madness of the price action, you can greatly improve your trading profits.

There are several techniques you can use for trading using Elliot waves. Ultimately, it boils down to your experience and how well you can use the theory for spotting potential places for entering and exiting the market.

Importantly, instead of spending countless hours trying to identify every wave and every correction, you should look at the big picture. Are you able to tell whether the market is in impulse or correction?

Furthermore, if a currency pair is in correction that is likely to be exhausted soon, are you able to tell where to place an order when the predominant trend resumes?

The theory has withstood the test of time, and it could be just what you need to take your trading to the next level.