In lieu of a preface

Last month we got a strong bullish breakout in market sentiment. It was really the high wave of positive news in media as well as analysts’ view on market perspective. Market performance was not disappointing as well. This trend continues in June as well. Maybe we do not have as bright headlines as in May, but overall tendency brings optimism in the future of cryptocurrencies in general and Bitcoin in particular. Let’s take a look at what events June brings us.

The Japanese House of Representatives has officially approved a new bill to amend national laws that govern crypto regulation, Cointelegraph Japan reported on May 31. The bill seeks to introduce amendments to two national laws that apply to crypto assets — the Act on Settlement of Funds and the Financial Instruments and Exchange Act. Now that the bill has been passed, the revised acts are expected to come into force in April 2020.

How the Super-Rich Are Buying Up Bitcoin

The world’s wealthiest, who want to buy bitcoin do it through an office in west London’s upmarket Mayfair—and the relatively new service is becoming increasingly popular amongst the super rich with an interest in crypto. The Dadiani Syndicate, which styles itself as an investment “platform for … maximizing your digital holdings,” and matches big bitcoin buyers and sellers in a way similar to buyers and sellers of fine art, claims to have helped clients who want to acquire “up to 25% of the bitcoin market”–worth many billions of dollars.

The Dadiani Syndicate is described as a “peer to peer network,” with people trading between each other.

“One of our clients approached us and said they were interested in acquiring 25% of all bitcoin currently available,” Dadiani said. “There are a number of entities who want to dominate the market.”

A quarter of all bitcoin currently in circulation, including those bitcoins that may be permanently lost, is around 4.5 million and worth a staggering $38 billion at current exchange rates. Dadiani said this kind of accumulation is not possible to “realize,” but her company has been instructed, “to scour the markets and gain access to as close to 25% as possible.”

Whales Could Pull Bitcoin Back To $20,000, Says Asset Manager

A small group of deep-pocketed traders has been able to exploit market sentiment and set the trajectory for crypto prices, according to one asset manager. Travis Kling, Founder and Chief Investment Officer at Ikigai Asset Management, believes that there could be sufficient momentum to take Bitcoin (BTC) past its all-time high.

Based on information collected from his own analysis, as well from conversations with other institutional investors, Kling hypothesizes that a small group of “risky whales” manufactured the recent market upswing.

“We believe a relatively small number of highly sophisticated, well-capitalized, highly risk tolerant market participants have been walking this crypto market higher over the last seven weeks,” Kling first wrote in a note published April 1st. (Article of 31st of May).

According to Kling’s hypothesis, the Fed’s capitulation allowed the ‘risky whales’ to take the crypto market up to higher price levels.

Bitcoin could soon cross the $10,000 barrier.  “This is not a linear market,” Kling said, and once that barrier is passed, Bitcoin could snowball to $20,000, or even $30,000, as euphoria sets in and reflexivity push prices still higher.

For the whales who started the trend, Kling believes most of them value Bitcoin in the hundreds of thousands, if not millions. After lifting Bitcoin from its December lows, it’s not certain whether they would take this opportunity to dump their coins or continue trying to push prices higher.

Chris Peterson, formerly a UX consultant for Google, joined cryptocurrency venture Bakkt earlier this month as the firm works on rolling out a mobile application for a digital asset wallet, dubbed Bakkt Pay, according to a person familiar with the situation.

Bakkt, the brainchild of Intercontinental Exchange’s Kelly Loeffler and Jeff Sprecher, was announced with great fanfare in August 2018, promising a platform that would help people invest bitcoin in their 401(k)s. To start, Bakkt said it would launch a physically-delivered futures product tied to bitcoin, but regulatory headwinds have pushed the launch date back by several months.

Recently, COO Adam White said in a blog post that it would begin testing its bitcoin futures product on July 22. The blog post revealed new details about Bakkt’s platform, including its intention to ensure the custody of bitcoin for as much as $100 million.

Still, it is unclear when any product from Bakkt will be released, leaving market observers wondering, “When Bakkt?”

Hash rate hits the maximum of 65.19 Th/s according to Blockchain.com 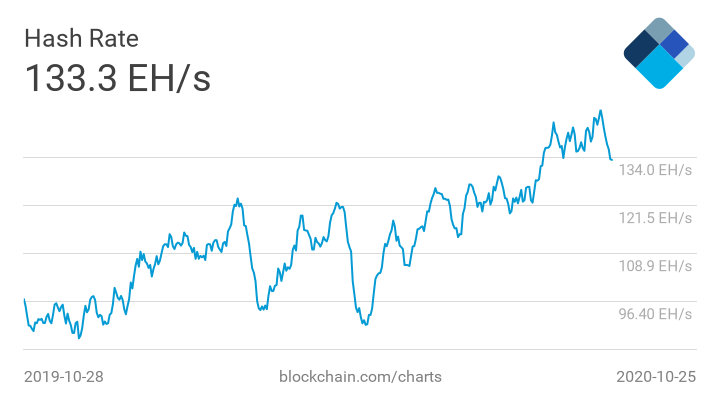 Recent research of this subject tells that Hash rate has a direct relation to the cost of Bitcoin. Thus, expert Max Kaiser points out that this could be a signal of further upside continuation on the market. Earlier, analysts of Data Light discovered a positive correlation between price and hash rate of BTC. But, for truth sake, we have to say that when last time hash rate hit the record – the price has turned down and hash rate collapsed soon after. Thus, this is still a question of what is leading and what is a lagging indicator – rate or price of the BTC itself.

CME informs on the rising popularity of Bitcoin futures

Things that we’ve mentioned above sound sweet but as it is always happening – the asterisk on the road to pure happy.

Ripple CEO Brad Garlinghouse is adamant that Facebook’s unveiling of its Libra cryptocurrency will lead to big business for his banking software and cryptocurrency startup.

“This is going to be a record week for Ripple,” Garlinghouse gushed Thursday during Fortune’s Brainstorm Finance conference in Montauk, N.Y.

Garlinghouse said it was a “fact” that Facebook’s Libra announcement has caused more banks to seriously consider using the company’s xCurrent banking payment software and associated XRP cryptocurrency to assist with transferring money across borders.

“[It] has absolutely catalyzed contract activity,” Garlinghouse said. “This has been a call to action.”

…and the spoon of tar

Previously we’ve put excellent long term fundamental research of Bitcoin market from Canaccord Genuity. As Facebook “Libra” coin makes a lot of noise in the net and attracts a lot of attention across the board, Canaccord expresses their view on the perspective of this currency.

In a note to clients Wednesday, analyst Michael Graham wrote that Facebook’s Libra Network, unveiled on Tuesday, would seemingly benefit the blockchain space, unbanked individuals and (to some “modest” amount) Facebook’s bottom line. However, he highlighted that the project must first receive a seal of approval, or at least no resistance, from national governments worldwide.

“Regulatory headwinds could be hurricane force – on one level, governments should appreciate Libra for the boost it might bring to global commerce. On another level, Libra is by far the most credible crypto threat yet to government-sponsored currencies.”

Indeed, lawmakers and regulators are already pushing back against the project. In the U.S., Representatives Maxine Waters and Patrick McHenry, respectively the chair and ranking member of the House Financial Services Committee, has called for a hearing with Facebook executives to discuss Libra, with Waters going as far as to ask Facebook to cease development – at least temporarily.

Rep. Waters: the US Can’t Let Facebook’s Crypto ‘Compete With the Dollar’

The chair of the U.S. House Financial Services Committee is doubling down on her calls for Facebook to pause development on its new blockchain, Libra.

“It’s very important for them to stop right now what they’re doing so that we can get a handle on this,” Waters said of the social media giant. “We’ve got to protect our consumers. We just can’t allow them to go to Switzerland with all of its associates and begin to compete with the dollar.”

CNBC’s Waters interview made it clear her concerns are more with Facebook than with the company’s announced cryptocurrency project. Waters highlighted an ongoing investigation by the Federal Trade Commission into potential privacy violations concerning consumer data. She also mentioned a Department of Housing and Urban Development lawsuit that accuses Facebook of violating fair housing laws.

“And while we’re doing that they have moved on to develop this cryptocurrency,” Waters said on CNBC. “We’re now going to move, and we’re going to move aggressively and very quickly to deal with what is going on with this new cryptocurrency.”

Bitcoin ETF Will Be Approved When This Happens: SEC Commissioner

An SEC commissioner who’s a bitcoin skeptic admits the agency is experiencing internal disagreements over how to regulate crypto. However, Robert Jackson says the SEC will be more likely to approve crypto proposals, such as a bitcoin ETF, once the industry matures.

Jackson is suspicious of bitcoin but says the agency will view cryptocurrencies more favorably when the market becomes more transparent, more liquid, and adds bigger players. So our soap opera on approvement of first Bitcoin ETFs continues.

On the technical side, some traders still think that bear trend is not over yet and Bitcoin market either could show moderate retracement or even create the new lows. As an example, here is the point of view of some traders.

As a bottom line,

this month, we do not have loud breakouts on a way of institutional investors’ money involving on the cryptocurrency market. Big companies still either stand on hold or have entry barriers from government authorities and regulation and with a lot of talks around still can’t launch something really big. ICE Bakkt, Fidelity ETF, Facebook, JP Morgan, Goldman Sachs – news and rumors stand on surface and fruit is ripening but not yet.

The only thing that we have is some rumors on the secret society of “Big whales” and “rich people” who would like to accumulate a big amount of Bitcoins and supposedly move the market higher.

We also have a sufficient amount of negative issues, mostly from regulation authorities of a different kind that poke sticks into spokes and trying to break the natural process of market development.

Speaking on technical analysis of the market, despite massive euphoria on anticipation of the big rally, there are still a lot of bearish opinions. We’re followers of more weighted view and suggest that maybe not drop below 3000$ but healthy retracement should happen in the nearest future. This is just natural market mechanics and can’t be escaped.

As a result, we could speak on moderate positive sentiment on the market, but definitely we can’t speak yet on common crypto fever. As big companies also do not show real breakouts, it seems that the market gradually comes to live by efforts of investors who were out on collapse moment and now gradually returning with careful buying. Otherwise, upside action should be much stronger, taking in consideration relative low liquidity of Bitcoin market. This market hardly will be able to absorb massive institutional investors’ interest if they come at one moment.