This month, our update on the fundamentals and sentiment of the crypto market in general, and Bitcoin in particular, will be brief: April has been unexciting except for Bitcoin’s price action.

After the solid rally of April 10, the general sentiment was, “Here, we go. Fire in the hole!” But, no, the price faced serious daily resistance (we cover this in our daily BTC videos), remaining coiled for three consecutive weeks already.

Our task is to put this in perspective, understand what it means, and determine whether it has any importance. Truth be told, many have attempted to answer these questions. If anything, there has been too much analysis and speculation about where BTC might go next.

We start by pointing out the obvious: Where are all the news, discussions, and rumors about crypto ETFs for institutional investors, big bank adoption, big futures projects launches, and so on?

For some reason, the lack of developments on this front is not being discussed widely in the media, but we feel it is extremely important. The expectation has been that institutional funds would become a major driving factor this year and in the near-term. Related developments seem to have almost disappeared in April in contrast to the volume we had during the first quarter. Of course, this does not prove disinterest or that the expectation was unfounded. When we consider how difficult it is for big banks, management companies, and government authorities to become involved in this sphere, we begin to understand why no major breakthrough has taken place.

We should view this as a temporary setback and delay. The process promises to be long and difficult since no quick solution has been found. However, this stagnancy does not play in favor of cryptocurrencies. At the very least, it deprives the market of the much-anticipated depth and liquidity, what we call “easy money,” which was expected to be really big.

Although not widely discussed, we feel that this stagnation will have a lasting impact on sentiment.

The Bitcoin rally of April 10

Without a doubt, the rally was the biggest event this month. In many previous reports, we pointed to a significant drop in the liquidity of the Bitcoin market. This is why whenever I see a big rally (or collapse), I watch for its durability. Experience has taught us that strong BTC action does not necessarily indicate a global sentiment shift or the start of a trend like it does in the traditional markets. The Bitcoin market is so thin, and there are so many technical features that might be driving it and so many nuances when it comes to trading. We cannot jump to conclusions, and this time is no exception.

Sure, there was a great rush and fascination after a big jump, but what we see now? Those who follow our daily videos know that Bitcoin stands at major daily resistance with the bearish pattern on the back while circling the same level for three weeks in a row.

This has led to many contradictory forecasts and opinions, which we will look at more closely later in this report. Right now, let’s see what experts have said about the rally:

The first hypothesis is that Bitcoin is being manipulated.

In our view, this opinion deserves a closer look. As Blockchain.com stats show in the chart below, right after the active phase of the rally was over – with BTC hitting the $5050 area on a retracement back to $4840 – the total amount of transactions dropped drastically. 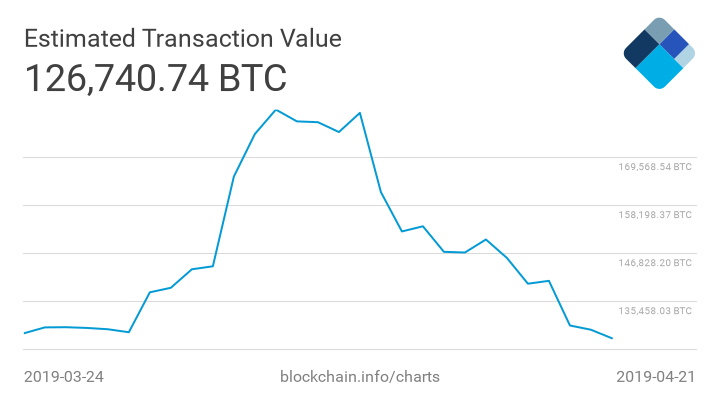 What is really interesting is that we do not see any drop in difficulty, as the chart below shows. 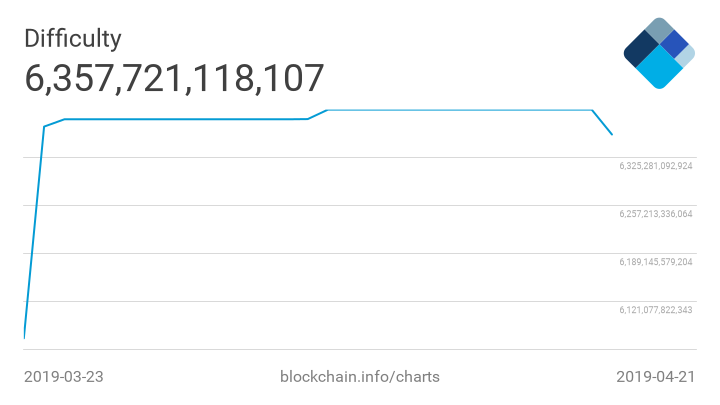 Also, the hash rate remains the same after the start of the retracement. 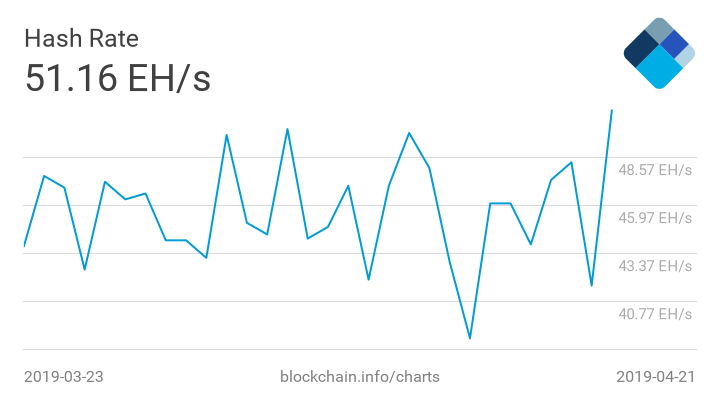 According to experts, the combination of these factors suggests that the price may have been manipulated. A DDOS attack on the blockchain may have increased statistics artificially and showed rising demand and trading activity.

As mentioned in our March report, research by Blockchain Transparency Institute shows that only 3 of the 25 largest trading exchanges provide true trading volumes. Therefore, we cannot exclude the possibility that the big rush was created artificially. Such manipulation could not have been produced solely by technology; technology and code programmers would have had to act together with big Bitcoin holders.

There are many stops on a bearish position around the $5K level, all of which were hit. The market indirectly confirms this theory because the price is standing flat around the top, showing no drop. This could be treated as a sign of a potential breakout and energy build-up.

However, this hypothesis has one important weakness – it is a consequence of upside action. In fact, it is the result of a rally but not its reason. Yes, stop triggering makes a rally faster and stronger, but this is a technical execution and reaction on an upside action that has already started.

In today’s BTC video analysis, we said that BTC is at a point of exhaustion. Upward action is very slow and looks weak technically – this means is that only a strong external force could spur a rally.

In the very near term, we expect strong action that should clarify BTC’s future perspective and answer the question of whether the rally was an artificial spike or a real shift in sentiment.

To sum up, before we move on to some news: Market analysts have not arrived at a consensus on BTC’s future direction at this moment.

Adamant releases a report on Bitcoin

Adamant Capital has published a great deal of interesting material and analysis in their recent report. In general, their position could be described as follows:

“Sentiment on the BTC market starts to change, and it turns to ‘accumulation’ phase when price holds in range of $3000-6000 for a considerable period of time while the background for the real bull market will be cemented.”

They see the following reasons for a start of a bull market:

Other views are mostly focused on the short-term perspective.

On the upside, Borman sees the next target around $5500, where the price stalled previously. He asserts that we could get rejected off these levels due to the 50-week MA. He adds that a breakthrough could bring us nicely to $6k, a level that would signify the end of the crypto winter, as many have suggested.

So, opinions seem to be leaning toward a fairly strong upward movement, providing we break through the aforementioned key levels. The good news is that any rejection is likely to be supported with a fair bit of cushioning on the way down.

We can also report the following events and news for this otherwise lackluster month.

Cointrader Monitor, a tool that monitors and analyzes Bitcoin price movements in Brazil, announced that local exchanges traded over 100,000 BTC on April 10. This volume spike coincides with recent increases in Bitcoin values, surpassing the BRL20000 price mark. As a result, on April 10, the total amount of transacted was over BRL 2 billion.

Market loses $6 billion during Easter Sunday, Litecoin and BNB down 7%

The above-mentioned losses are among the largest of the last six days when crypto prices were rising, and the global market cap had taken hold over the $170 billion area.

At the time of this writing, the number is down to about $167 billion, with all but a handful of projects in the top 100 cryptos in the red, according to data from Tradingview.

The following three announcements affect the infrastructure of the market:

According to their announcement: “At Binance, we periodically review each digital asset we list to ensure that it continues to meet the high level of standard we expect. When a coin or token no longer meets this standard, or the industry changes, we conduct a more in-depth review and potentially delist it. […] Based on our most recent reviews, we have decided to delist and cease trading on all trading pairs for the following coin on 2019/04/22 at 10:00 AM UTC: Bitcoin SV (BCHSV)”

Japanese financial services giant SBI Holdings says the removal of Bitcoin Cash (BCH) from its exchange was not a result of the other delistings involving Bitcoin SV (BSV), according to a report in Cointelegraph Japan published on April 19.

On April 16, Kraken’s blog stated: “Over the last few months, the team behind Bitcoin SV have engaged in behavior completely antithetical to everything we at Kraken and the wider crypto community stands for. It started with fraudulent claims, escalating to threats and legal action, with the BSV team suing a number of people speaking out against them. The threats made last week to individual members of the community were the last straw.”

As you can see, we did not have many events this month. We have shared the most important and interesting that, in our opinion, are likely to have a long-lasting impact.

We take a pragmatic view of the April 10 rally. We feel that the main long-term tendency remains bearish. From a technical perspective, to show clear signs of a long-term tendency, the market has to move at least to $6500, or better yet $8500. We see bearish patterns here as well.

The fundamental background shows no positive breakthroughs and stands mostly neutral with the same commotion around hacking, forking, etc.

In summary, our estimation is that the market will drop under the weight of its own burden. A rally would require a potent driving external factor, whatever that may be. On its own, Bitcoin has no intrinsic power to continue with an upside action at this moment.