With the first month of the new year almost over, it’s time to look at whether market sentiment has changed, and weigh in on the upcoming Bitcoin halving.

In November’s overview, we identified two key factors that influence the market. The first was expansion, which we saw as the primary indicator of progress. In general, Blockchain technology, and its applicability to cryptocurrencies and finance, has seen no major breakthroughs or innovations; it remains focused on existing, widely-used tools such as tokens, ICOs, altcoins, forking, etc. As mentioned in the previous report, we anticipate that development in this area will be slow. Those who, in the past, extracted big profits from classic assets are not likely to dive into new business blindly or start testing the “new” market for some time.

The second factor, which holds great promise for growth, is regulation. As we have already explained, regulation should not be considered entirely negative because big investors require it, and the market requires their money to grow. With that said, in the process of introducing regulations, authorities and central banks may pull in the reins too tightly.

Without a doubt, the power inherent in digital assets frightens governments and supervisory authorities. Therefore, regulation carries risks; it could impact the liquidity and applicability of the currencies by creating conditions, sanctions, and barriers that could significantly impede the first factor, expansion.

Since both expansion and regulation have long-term effects, we will keep an eye on how the scales balance between them. In the meantime, we turn our attention to a hot topic, namely Bitcoin halving.

The issue is complicated and difficult to explore thoroughly because it requires in-depth research and analysis of hash rate, mining hardware spending, BTC return per dollar of mining expenses, and so on. Nevertheless, the task at hand is not to arrive at precise calculations but to answer the burning question: How will it impact the price of BTC? Common sense reasoning should suffice in shedding light on this matter.

In the spring 2020, likely in May, the so-called “halving” should take place, meaning that the reward for each block will drop from 12.5 BTC to 6.25 BTC.  In other words, the system will issue half the number of Bitcoins than it did in the past.

Mining companies have no magical profit formulas. When it comes to their bottom lines, they are no different than all other companies, whether Exxon or Walmart. Their profits and losses are based on revenues and expenses. The only difference between crypto mining and other companies are the key line items on their balance sheets.

Since mining rewards will be cut in half, we can speculate what will happen to Bitcoin’s price after May 2020 or, at least, how it will impact the mining companies. Let’s have a closer look, starting with revenue.

When the rewards are reduced to half, the revenue will see an equal reduction. Since the number of blocks rewarded per period depends on hash rate, in order to increase the rewards, mining companies will have to invest in additional hardware and use more energy. To provide some perspective in terms of cost, a relatively modern ASIC device costs around $ 3,000 and delivers a hash rate of around 14-16 TH/s. It consumes approximately 1.2-1.5 K watts.

After May 2020, Bitcoin miners must be prepared for the drop in revenues, while their expenses remain the same since these are based on electricity, hardware, and SG&A.  In other words, they will need the same dollar amount (~ $4.7K on average) to mine one Bitcoin.

Needless to say, there will be consequences, as in any scenario where revenues drop to half while expenses remain the same.

What does this mean for the miners? What can we expect to see in the sector?

1. The centralization of mining

Reward, BTC price, and equipment are the same for all mining companies. Total hash rate (i.e., mining power), electricity, and SG&A expenses vary. What this means is that companies with a wider margin (higher revenue and lower expenses) will have a better position on the market.

It also means that we will likely see a replay of what took place in the global economy – big companies compensating for narrowing margins by increasing turnover (in this scenario, increasing mining power to squeeze out smaller companies). When it comes to BTC mining, large companies have a better break-even point and a larger reserve of coins. To see how mining might be impacted by shah rate, electricity consumption, and energy price, you can run different scenarios on this calculator.

Companies with lower energy prices and fixed expenses (wages, rents, equipment maintenance, SG&A, etc.) will have an advantage. Since this tends to be the case in big companies, the halving will hurt the small ones more. When they stop mining because it is no longer profitable, their ‘share’ of rewards will go to the large companies. If they do not close their doors, they may join pools, or become targets of hostile takeovers.

This is already taking place. In the last article, we mentioned that the largest companies made big investments to increase their mining capacity. Particularly in recent months, the hash rate clearly shows greater activity, as the chart below indicates. Miners are accumulating Bitcoins. 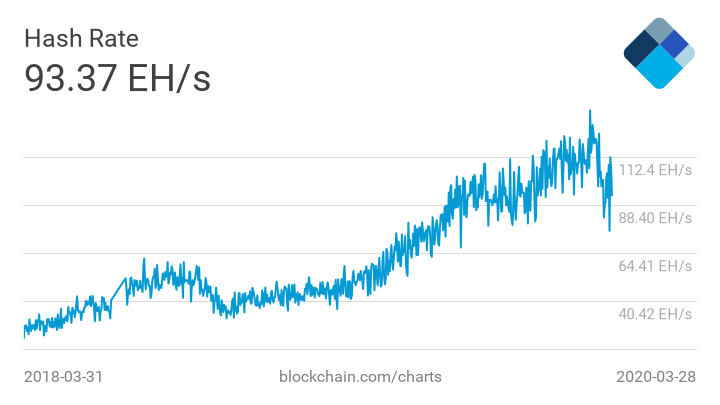 3. No halving effect on BTC supply

Since 86.6% of Bitcoins have been mined and are already in circulation, we do not expect a meaningful impact on the supply of BTC.

There’s a great deal of talk suggesting that miners will start selling their BTC reserves; we disagree. As much as 90% of the cost of mining goes to power, therefore, decreasing/halting the use of power and dropping the hash rate would enable miners to cut back expenses. Since the problem can be easily addressed by cutting costs, a mass sell-off is unlikely. Selling coins is a different aspect of their business, and – like everyone else – they want the best price. Even if they sell a small amount to cover some fixed expenses, the current price of 9-10K would not be affected.

With BTC’s price holding and rewards reduced to half (while other parameters remain constant), in theory, mining companies would have to sell two times the Bitcoins to cover their expenses. Unsurprisingly, lower BTC prices will frustrate the miners. Time will work in favor of the bears, and the market will be extra sensitive to occasional drops, which could trigger massive sell-off as miners remain in “standby mode,” ready to start selling coins to cover expenses. We believe the trigger point to be around 6K per coin, but – as we have already said – it is also a function of time. One or two weeks below 6K is not likely to have an effect, but miners would not be patient forever. Three to five months under 6K would challenge their psychology, leading to a drop in the hash rate, the sale of some BTC, or a combination of both.

Since mining companies are about to face harsh conditions, they will be forced to look for other means to preserve their margins. BTC futures and options are great tools because they could fix BTC price at an acceptable level and deliver coins. Crypto mining companies resemble export companies in that their revenues are in one currency (BTC, for example) and their expenses in another (USD, for example). As such, they have a specific BTC/USD level, which is comfortable for long-term mining. When they see that level on the market, they could fix it by selling futures contracts on BTC with delivery at the current price or by buying a put option, which gives them the right to sell BTC at a fixed price on delivery day.

Due to the small trading volumes and numbers of participants, the BTC derivatives market is rather thin and not as efficient compared to conventional markets. A big demand for derivatives from miners would increase the divergence with the cash market and allow for the extraction of additional risk-free earnings through the classic futures pricing model. For further information, please read December’s report. 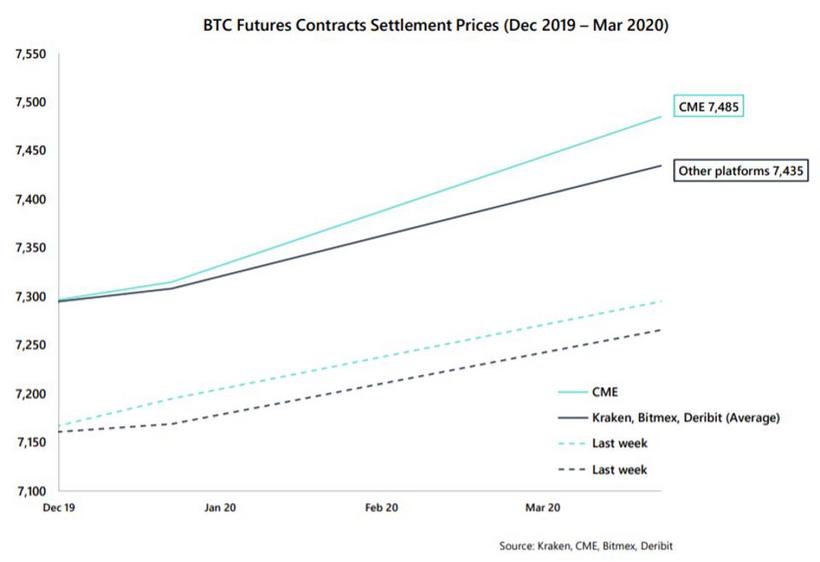 8. A BTC rally is not likely

During the previous two halvings, the market was in completely different stages of evolution. Although we saw BTC rallies after both halvings, we will not likely see the same reaction this time. To put it differently: Even if some rallying does take place, it will not be a result of the BTC halving.

In this report, we have considered the main issues around the upcoming Bitcoin halving. As we have shown, this is not an awful a prospect as it is being portrayed by news agencies, traders, and the rumor mill. Rather than view halving as a hazard, we expect it to open up new dimensions in trading, even if these may not be suitable for all traders.

Since mining companies can control their expenses by decreasing energy consumption and reducing mining activity, the halving is not a death sentence. With that said, it will not go unnoticed. The crypto mining sector will likely see a consolidation through closings, pooling, or takeovers of small companies. A geographical restructuring is also possible, that is to say, moving operations to locations with lower energy costs.

A strong demand for bearish BTC futures and put options will probably have some effect on the BTC cash market. Arbitrageurs’ activity could have a bearish impact on BTC, but we suggest that it will be minor and temporary because of the small amount of BTC extracted after the halving, compared to the number of coins already in circulation.

Mining activity should increase until the halving, as the steady rise in hash rate already shows.

There is nothing to be overly concerned with, as long as the price of BTC stays above 6-7K. We should be uneasy about sharp drops, especially if BTC stays there for more than one month. In our view, the market will be more sensitive to levels below 6K.

As always, if you think that we’ve missed something important or you have something to add, do not hesitate to share your opinion on our blog and forum.

megabizland
a year ago,
Registered user
Thank you SIve. Frankly speaking I do hope that BTC will go down below 6K after the halving :D