I want to share with you my experiences about what I call the “Learning Cycle” and it’s still in my very early days of learning to be a trader and again I’m sure it’s something that you have experienced if you are already trading. If you are brand new to trading or you’ve not even started trading, this is something that you will more than likely experience. 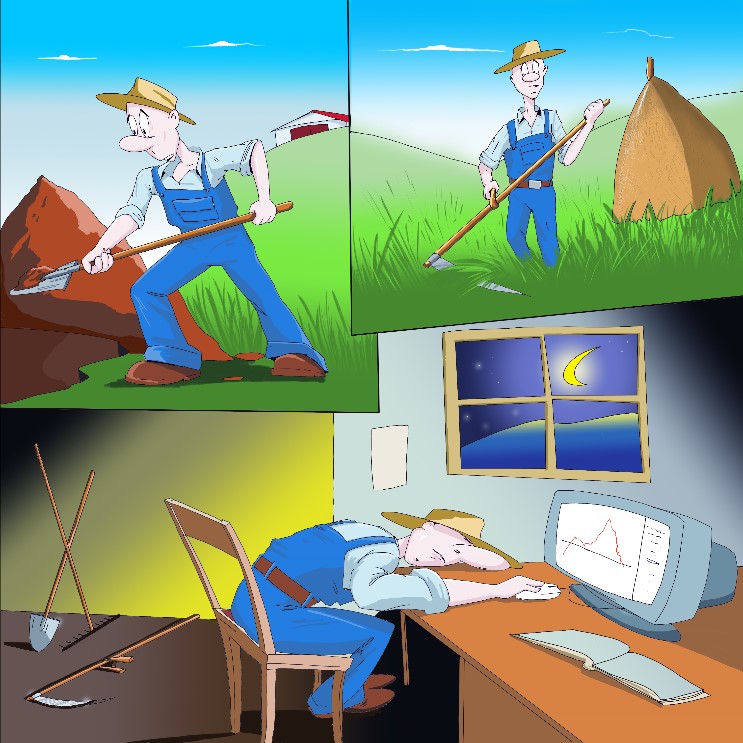 The problem with those indicators is that they look good when the prices have been fixed but in reality, on the right hand side of the chart the indicators are moving up and down and they are never quite fixed until the completion of the candle, sometimes even the subsequent candle so it meant that even when I took a trade based on this indicator crossing over that indicator I was entering trades very late and getting stopped out all the time.

I was still in search of more and more information. In fact, I actually went back and re-took the course in Auckland. I did a refresher thinking that maybe there’s something that I missed.

I also took a very good friend of mine along to that course. He had also just finished farming and he was keen on looking at other avenues after farming and for me it’s quiet important because it also meant that I had someone I could talk to about trading because he was someone who I knew really well who was a friend of mine who’d also now taken the same course.

One thing that I found with trading is it’s quite a lonely business and no one really knows what you’re doing. I had also gone through a divorce so people look at you a bit funny thinking “Well, he’s lost his mind. His wife’s has just walked out on him, he’s lost his farm, he’s now loosing half of everything he owns and he’s doing this funny sort of gambling thing that he calls trading.” It is quite unnerving and you feel quite remote from other people. You feel that people don’t think you’re doing a real job.

I’d come from what was a physical job creating a product, being milk and farming animals and farming the land doing a physical honest day’s work to suddenly sitting behind the computer screen, sort of guessing and gambling as the other people saw it - I may as well have been in a casino or at the horses, gambling.

Whereas in reality nothing could be further from the truth because I’m not a person that ever goes to a casino. I don’t bet on lotteries, I don’t bet on horses so I was saying “well no, it’s not gambling”. This is trading, this is the skill that I’m learning to be able to work from home to look after my Son from home rather than having other people look after him or losing him to my ex-wife. It was something that I was really determined to conquer and to master because I had so many reasons why I wanted to work from home and to be there with my Son. It was really important to me so I was determined as anything to make this work.

I suppose it’s also quite disappointing and frustrating when what you think is looking really good, such as a course or e-book strategy doesn’t work in real time. It’s very, very disappointing at times and of course you’re there by yourself trading alone.

So when I put my course together I was really determined to make sure there’s a community of traders together and we’ll meet up on a live webinars and talk about trading. My clients also have daily access to information about the market that I post for them.

However, going back to the course that I took myself, well there was none of that. They did start some webinars and they were live webinars but the tutor was not actually trading live. There’s a big difference here. What they were doing was kind of hand picking out some of the best setups from the previous week to show on their weekly webinars.

They were only showing screenshots of the really good setups and telling the students about the huge amount of pips they could have made. We constantly heard “we’ve sold here it went down or bought here and went right up here and we made X number of pips and at $10 per pip, that was 120 pips at $10 per pip that was $1200 you just made on your account”.

What they didn’t ever suggest or show was that they’d taken the trades themselves in real time whether it be a live or demo account nor did they ever explain an exit level, a stop loss level or a profit target level. Therefore it was very much manipulated to look good and that’s one thing I’ve found with a lot of products.

Back then, there weren’t really so many review sites as we get today so it was very easy for people to sell systems and indicators and E-books and EA’s or robots without really having any proof about how the product was actually performing. As there were very few reviews, you sort of bought a product in hope more than anything.

I got into the stage of putting more and more indicators together and having different combinations of indicators and basically just confusing myself and filling my charts with so much clutter.

The actual price on the right hand side of my charts, the price axis didn’t even come in to the equation. It wasn’t until little a while later did I realise I was actually missing the main point which is the price but at that time indicators were the way that I was heading.

Another thing that I was also quite keen on looking into was news trading, trading the main news events which for me in New Zealand meant trading in the evening being the European session and all through the night being the US session. So my evening was the European session my night time through to the early hours of the morning was the US session. It meant I
was setting my alarm clock for 12:30 in the morning, and 1:00am, and 2:30am, and 4:30am to trade all the US news announcements.

Therefore trading news became quite a difficult thing to do even after I purchased specialized news trading software that filled the trade a split second after the announcement. Again like so many other pieces of software, in reality on live accounts didn’t make money for me.

I got thinking that the more complicated the systems, indicators and theories surely that’s going to give me the end result that I needed which is to become a profitable trader.

I found that the Fibonacci levels the way that they’re traditionally taught and explained and especially Elliott Wave Theory was very, very difficult to trade in real time. So I needed to discover something that’s going to work for me.

More about that next.