The Correct Use of Correlation

The concept of forex correlation has attracted a lot of attention. Let’s have a look at it. I will not look directly into specific trading methods, but more how the knowledge about correlation can help us in becoming better traders. In my opinion, the knowledge and correct application of correlation can give a great advantage in determining the right entry and exit points for a trade. It is one of my favorite methods to keep me away from fakeouts and overtrading.

What is correlation? In pure terms, correlation is the measured relationship between two units over a series of time. 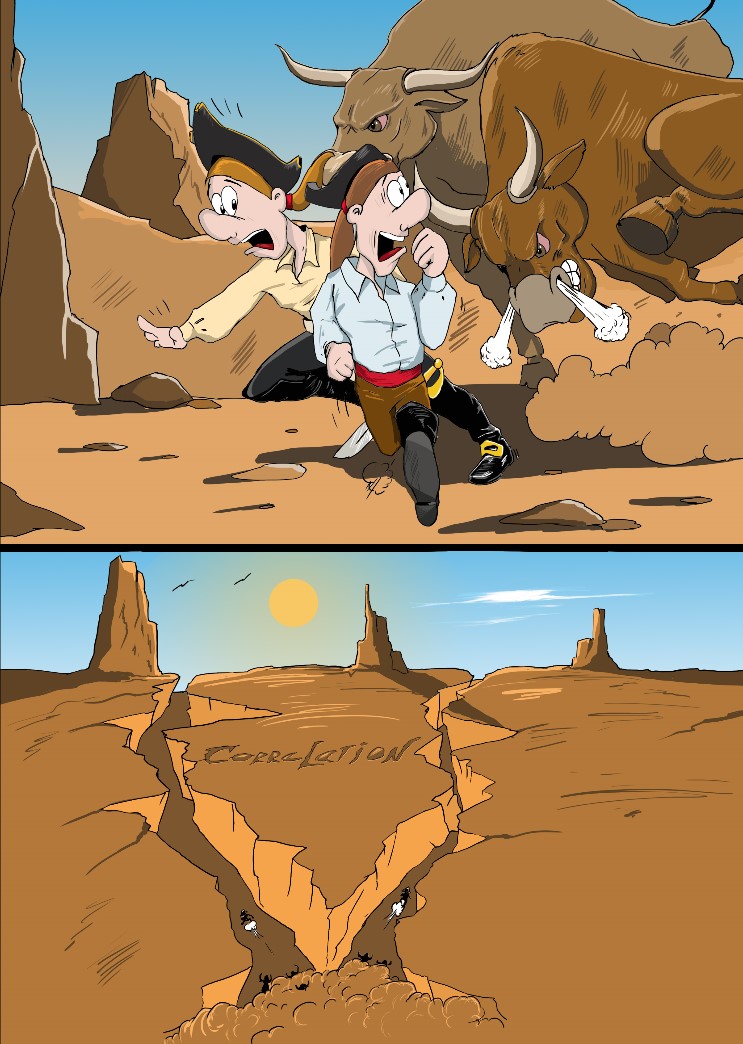 When you trade the forex market, you must realize that you are, in fact, trading currency pairs as single units. These pairs comprise two currencies and their prices are determined by dividing the value of one currency by that of the other. Again, you must appreciate that you are really making two trades when you go long or short on a currency pair. For example, if you trade the EUR/USD long, you are buying the EUR and selling the USD. As such, you would be making a mistake if you viewed this trade just as a single operation. Instead, you must realize that you have activated a commercial relationship with two currencies. This is important to appreciate in order to understand the correlation and relationship of each of these two currencies, in question, to others.

For instance, many traders like to diversify their trading in order to both reduce their exposure and minimize their risk. However, before doing this it is good practice to examine the currencies for any correlation i.e. do they both rise at the same time or do they tend to move in different directions. In addition, you must quickly realize that currency correlations change over time and that although two currencies may have moved in one direction yesterday they may not do so today. Hence, you need to monitor developments in correlation constantly.

Correlation will help you determine if a trend of a currency pair is strong and if it is likely to continue in the same direction. For example, the EUR/USD and the USD/YEN tend to move in opposite directions. If the EUR/USD is rising, the USD/YEN is usually falling. Consider that you have decided to go EUR/USD long because it has just broken an important resistance level. Before doing so, you should check the correlation of the USD/YEN to determine if it is just above a major support level. If it is, then you would be advised to delay opening your EUR/USD trade until you receive confirmation that the USD/YEN is capable of breaking its support.

There exists a strong correlation between the stock market and currency pairs as well. For instance, if the Dow Jones Index rises, then the higher yielding (interest rate) currencies tend to rise as well against the lower yielding currencies. The opposite is true if the Dow Jones falls. Although this correlation obviously implies correlation with specific stocks as well, there is no reason to dig into such details as the stock indices provide the best indication. The most important ones are United States S&P 500, Germany’s DAX, Japan’s Nikkei and United Kingdom’s FTSE.

Although such correlation is never perfect and diverges from time to time, the reason behind it is rather simple. When a stock market rises it attracts buyers from around the world. When foreign currency is used for acquiring stock, they are “turned” into local currency and are thus likely to induce a bullish sentiment into that currency as well. The same is true when the stock indices are falling and the stock owners are likely to cash out, hence turning the local currency back into foreign currency. Now this does not necessarily imply that you should simply buy the JPY if the Nikkei is bullish but it can be a great advantage to take this into consideration before entering a trade.

However over the past few years, traders have become accustomed to the idea that the day to day moves in stock impact currencies. When equities sell off aggressively, the U.S. dollar usually strengthens across the board as investors pile into the lower yielding safe haven currency. When equities stage a strong rally on the other hand, the dollar tends to sell off as safe haven flows ease. One of the best ways to take advantage of this general correlation is to compare it to the EUR/JPY as this currency pair is generally considered to be a good measure of risk tolerance; hence it can basically be said that if the general equity market is bullish, the EUR/JPY currency pair is likely to follow the same direction.

By comparing major currency pairs in the forex market, you should soon detect that many of their movements are very similar. For example, the EUR/USD and the EUR/YEN tend to move in the same direction and, consequently, show a high level of correlation. Why is this? In both cases, you are buying the EUR and selling either the USD or the YEN in long trades. By examining the trading patterns of the USD and the YEN, you will notice that both move in the same direction against the EUR. When comparing pairs in the forex market for correlation, it is usually not wise to have a currency represented more than once. In the comparison of two currency pairs you should ideally have a total of four currencies affecting the relationship. In order that one is not overstated, it is vital that all four currencies, regardless of whether they are being bought or sold, only appear once.

Correlation comparison can potentially set you up for new and exciting trading opportunities as well as offer you several unique trading strategies. In order to do so, you must first understand the full breadth of what is being compared. As already mentioned, correlations between different currency pairs shift over time. Therefore it is of the utmost importance to regularly track changes in correlation. I recommend you monitor the 3 month and 1 year correlations on a regular basis so that you can gain a better sense of historical patterns.

In order to be an effective forex trader, it is also important to understand how different currency pairs move in relation to each other. There are many reasons why this is significant, but probably the most important is that it allows you to understand your risk exposure. For example, possessing a portfolio that comprises the EUR/USD and NZD/USD contains different risk elements than one containing the EUR/USD and USD/CHF. If you held both long EUR/USD and USD/CHF exposures, this would generally lead to zero profits or even losses because when the EUR/USD rallies, the USD/CHF will conversely sell off in most cases. Furthermore, correlations shift with time. For example, if the EUR/USD and GBP/USD had a strong positive correlation for the last months to 1 year, the correlation may not have been as prevalent over the past month. Understanding this knowledge will enable you to more effectively diversify and manage your portfolio. Shifts such as these, can be partially explained by changes in the severity of monetary policy or changes in unique domestic conditions. For instance, a sharp shift in the UK´s monetary policies that increase the probability that it may lower its interest rates, could prompt many carry traders to close their long GBP/USD trades. This kind of action has directly caused a breakdown in the correlation of the GBP/USD and EUR/USD pairs in the past.

Regardless about whether you are looking to diversify your positions or find alternate pairs to leverage your trading portfolio, you must understand that it is very important for you to keep in mind the correlation between various forex currency pairs and their shifting forex trends.