Commander in Pips: As you understand from the topic of this part, we will talk about ranging market. Speaking definitely, how different indicators tell us that the current environment is a ranging market.


Pipruit: But Sir, this is probably will be just an opposite to a trending market…​

Commander in Pips: Absolutely. This part will be very light in term of education. So, I suppose you can tell me about ranging market and indicators by yourself.

Commander in Pips: And why not? We will talk only about what we already know. 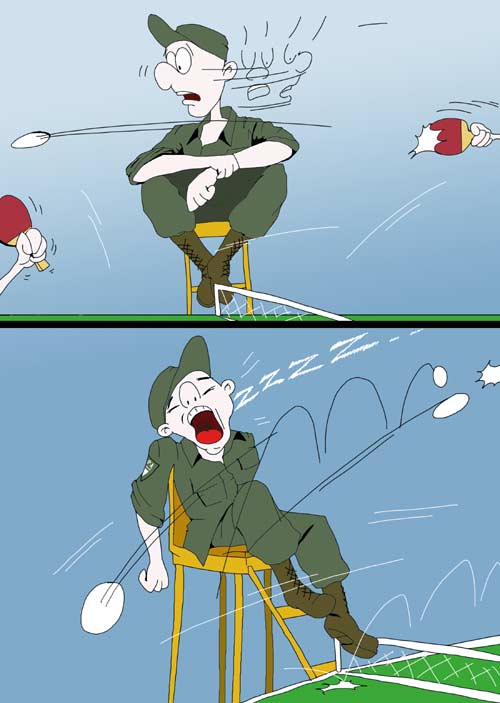 Commander in Pips: Fine, so is your plan – tell first about ranging market – what is it, then describe how ADX, Bollinger Bands and different oscillators behave in a ranging market.


Pipruit: A ranging market is when price action holds within some range. Also we call such market’s condition as contraction, because all swings do not exceed 1.0 extension from previous ones. Particularly that makes the market stand in the range. Initially the market establishes some high and low price and all consecutive price action holds between them. The high acts as major resistance while the low acts as major support. Market movement itself could be categorized as sideways or horizontal.​

ADX in a ranging market


Pipruit: As we know ADX shows only a trend’s power but not its direction. In the common approach it is treated that a trend increases (gaining power), when ADX moves above 25. When it reaches some highs and turn to decreasing, it means that the trend becomes weaker. When ADX stands below 25 it tells that there is no trend currently, or other words – a ranging environment. Such example we can see on chart #1:​
Chart #1 | 5-min EUR/USD and ADX (10) 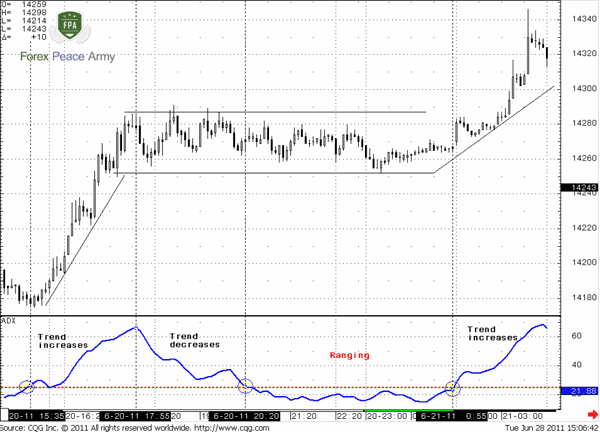 Pipruit: Still, we see that ADX is a bit lagging. Although it shows trend start relatively on time, it lags when the market turns to ranging. See – the market stands in a range a long time, while ADX is still moving down towards 25, shows that trend still holds, although becoming weaker.​


Pipruit: I do not quite understand all the stuff that you’ve explained about standard deviations and normal distributions, so my foundation is what you’ve told about trending market. Since ranging market is opposite to trending one, hence, our thoughts here have to be opposite also.​ 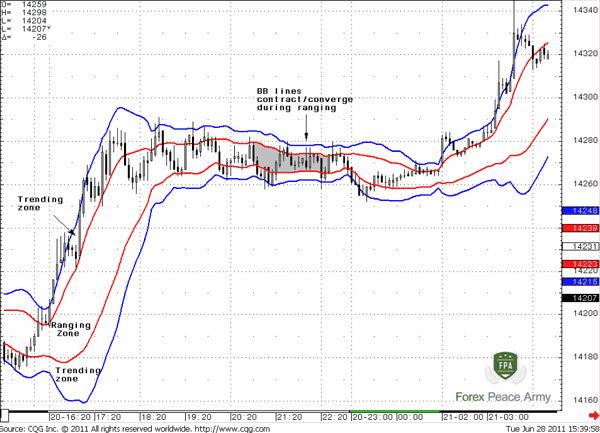 Commander in Pips: And what will you answer if I say that both MAs have the same period…


Pipruit: As I’ve said, I do not quite know it.
​
Commander in Pips: Ok let me just make small theoretical add-on to your purely practical thoughts. In fact the width of the lines shows volatility – average deviation of price from its average. The red lines show a single standard deviation on both directions, blue lines show two deviations. When the market turns to ranging, the overall trading range contracts, hence, the deviation from average price is also contracting. That’s why the bands narrow and converge to each other.

Second, the red lines show interval where price should stand with a probability of 68% - just a range of 1 standard deviation. AS market stands there it tells that volatility decreases significantly and the market in contraction mode. In other words – it’s ranging and it tells us that there hardly will be strong move in any direction. However, if bands start to expand telling us that volatility increases, it cautions us about a probable trend starting.


Pipruit: So, we can say, that in general, a ranging environment will be on the road with width decreasing between the bands and mostly in the horizon direction. Simultaneously price will stand in some horizontal range also, right?​

Commander in Pips: Yep. And what is a major idea in a ranging market?


Pipruit: While price moves with in some range, trader hopes to make money, if he/she buys near the bottom and sells near the top and vice versa.
​
Commander in Pips: Right. So the last indicators that you have to tell me about are oscillators.

Applying oscillators in a ranging market


Pipruit: Ok. As we know oscillators are normalized indicators in 0-100 range. RSI and Stochastic are the most widely known among them. In a ranging market they will work well, giving us signals, according to classical rules, that we’ve discussed in the corresponding chapter dedicated to them.​ 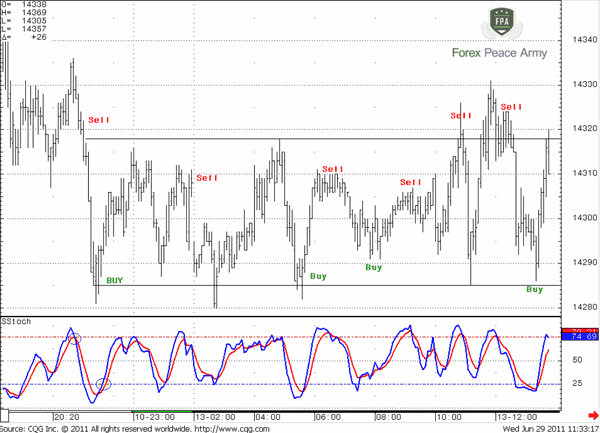 ​
Pipruit: Combining of oscillators with other tools could help to determine zones for Sell and Buy action with more precision, because they turn to oversold/overbought conditions there.​

Commander in Pips: Well that’s right. Also, it makes sense to note here that it’s better to apply range trading strategies with crosses. For the long term very suitable for that purpose were EUR/CHF and EUR/GBP pairs. But due to some turmoil on financial markets, demand for safe-haven CHF increased significantly, so EUR/CHF has turned to solid downward trend. Still, in a calm environment, when the crisis will end, these pairs will again become attractive for range trading.

So, we’ve met with trending and ranging markets. Still, as I’ve said in the beginning, applying indicators for identification what market currently stands is a not simple task to do. The big problem with that is a problem as a chained circle. From the one point of view you apply, say, oscillators on a ranging market. From the other point – they have to tell you that this is a ranging market. That’s why I suppose that a harmonic approach is better. Still, this is a classical theory and we have to know it as well.

What are ranging markets?

The ranging market appears when price remains inside existing, previously formed, high and low price levels for some time. As a rule, but not always, price forms the same tops and bottoms a few times. A ranging market is the opposite to the trending market and sometimes also called “sideways,” “flat,” or “contraction” market.

How do I know if a market is ranging?

There are three consecutive steps of the markets turning to the range: 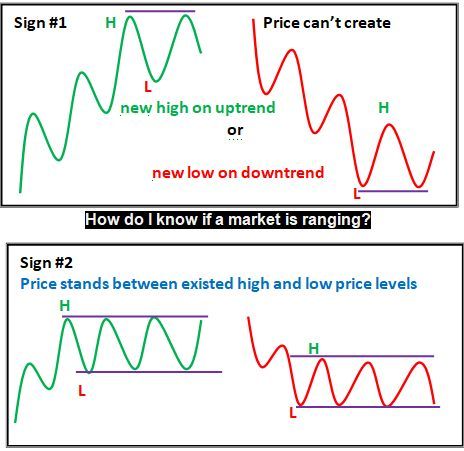 How do I trade a ranging market?

Common rules of trading the ranging market suggest to sell near upper border of the range and to buy near the lower border of the range. Upper border is treated as resistance while lower border is treated as support. Stop loss orders usually are placed slightly above the resistance on the “Sell” trade and below support on the “Buy” trade. Few technical tools exist for estimation of the particular moment of position taking. The most popular are – candlestick patterns, Oscillators (RSI, Stochastic) and other technical indicators, such as Bollinger Bands. Traders usually apply the combination of the mentioned ones.

How can we avoid market ranging?

To avoid ranging market you have to pay attention to the first sign of ranging. Once you see that market can’t create new higher high during upward tendency or new lower low during downward tendency – this could be early sign that market is turning to range. If you want to avoid trading the ranging market you will need to wait until the price breaks the range borders either to the upside or to the downside.

To be sure that range is broken you need to estimate range’s borders first. Range borders are determined visually. Upper border, which is also called as “resistance”, is formed by a few consecutive highs of the same price level, while lower border, named “support”, is formed by a few consecutive lows. In a case of upside breakout, price re-establishes tendency of new higher highs (and new higher lows) as new high will be formed after breakout. Alternatively, in a case of downside breakout, price will form new lower low and reestablish the tendency of lower-highs and lower-lows. Thus, you’ve avoided trading on ranging market.

What is range-bound market?

What is trending and ranging market?

What does market range mean?

Thus, whatever market range you want to calculate - it is always the difference between high price and low price. For example, on our GBP/USD daily chart "High" price is 1.62554, and "Low" is 1.58973.

Which currency pair ranges the most?

Currency trading range is a relative thing that is subject to change in time. Speaking of major currency pairs and their crosses, statistically, the largest range have pairs that are based on high volatility currency and US Dollar or other low volatility currency as a base. GBP is known for its high volatility, while CHF, JPY, AUD, and NZD volatility is relatively low. It means that the widest range among the majors belongs to GBP/USD and  GBP/JPY, GBP/NZD, GBP/CAD, GBP/CHF, GBP/AUD among the crosses.

Following the same logic, currency pairs with the lowest range are those that include currencies of approximately the same value in relation to US Dollar, like EUR/GBP, EUR/CHF, CHF/JPY, CAD/CHF, AUD/CHF.

Exotic currency pairs range exceeds the range of the major cross pairs by 3-5 times. For example, USD/SEK or USD/TRY have 3-4 times greater range than GBP/JPY.

That said, if you use trend following strategies in trading, it would be better to follow pairs that are based on GBP, while for trading in the range using of less volatile currencies is more suitable.

When estimating the Range, it's important to not get confused between the absolute range and the volatility.