Commander in Pips: If you remember, we’ve said that this is just a theory of strong relation between the Forex market and the stock market. It sounds logical, but does it really hold? Take a look at the first chart: 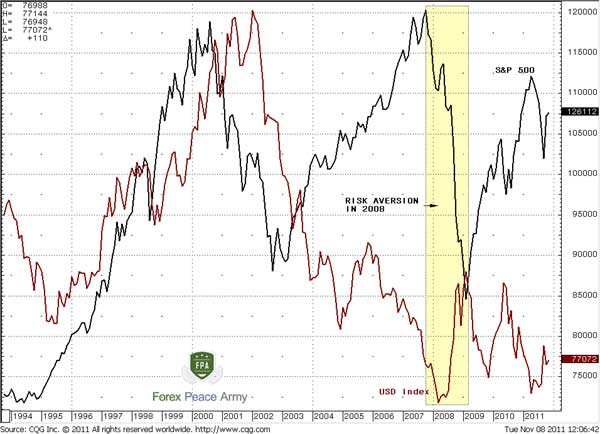 ​
Although we see that this theory works well till 2000, when the “Internet bubble” has blown up - nowadays this theory works poorly. The dollar has been in a downtrend since 2001-2002 and has shown just some retracement in 2004-2005, while the stock market was in a solid uptrend right from 2002 till 2007 and created new highs. Then we clearly can see risk aversion – one of the reasons why this theory does not work well for USD, JPY and CHF. Later we see the same story – the Dollar stands in wide range, while the stock market is rallying higher. So, we might say that for US, this relation is weak. It’s very difficult to use it in practice.


Pipruit: Hm, and what is your opinion, why it happens like that?

Commander in Pips: There are a lot of reasons this could be, but I share with you just with single assumption. This is just guesswork, and an idea, ok? I dare to suggest the reason is in the money supply in US, they even stopped releasing data on M3 in 2006 – that is a warning sign. The balance of the US quite different in 90s and 2011 – Budget deficit and balance have changed drastically. Money supply has increased in multiple times. As a result, I suppose that there are so many dollars that they are sufficient to satisfy investors’ demand and at the same time do not show any growth of USD. Other words – demand for USD from stock investors is insignificant in terms of the overall USD Money supply. There are just too many dollars in circulation.

The second reason is a derivative from that one. Stock markets could show hidden time of inflation. Since there are too mant dollars in the economy, rising of the stock market indicates not only increasing of US companies’ value, but mostly the devaluation of US currency. I just want to show you the following chart: 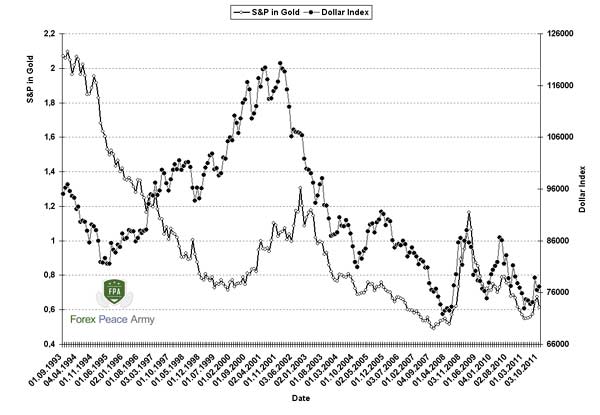 It is called “feel the difference”. In fact, here we calculated S&P 500 Index value not in US Dollars but in Gold. Here we see that right from 2008 S&P index is fallen, and there is no growth at all. This growth is artificial that based on devaluation of US Dollar and may be due to some other processes – absolutely inflationary growth. From that perspective link between Currency dynamic and stock market shows higher relation. 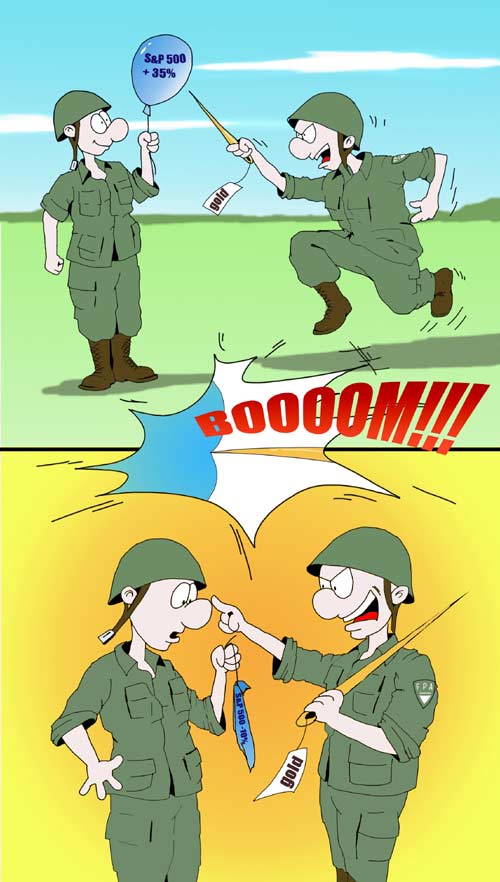 ​
Pipruit: And what we can do to reduce the probability of such losses?​

Commander in Pips: The most common approach to this is to use not just one but two MAs on the chart.


Pipruit: I have no words to say. This is just outstanding. But result of this could be awful…
​
Commander in Pips: Yes, sooner or later, the World's economy will be collapsed by a US Dollar default. Currently it costs much lower than it is quoted, but system now is still working. Although the dollar is overpriced, but goods are under priced in terms of dollar – and everybody behaves as if nothing is going on. This attempt to not see the obvious things leads to the system still working for now.

Commander in Pips: Since you earn fewer wages on your job (sum is the same but dollar value is much lower), you’re at the same time paying less also (goods price are the same). This is like if you know that you are deceived by somebody, but you agree to be deceived – then there are no problems around. Deceiving side is US government while deceived side is the rest of the World and mostly Japan and China and other big holders of US debt.

Ok, let’s take a look at other markets. May be the story a bit different there…

On chart #3 we see that JPY and Nikkei-225 are much more closely related. During 2002-2007, the stock market was in a bullish trend. Although the JPY has shown some significant retracement in 2005 – the overall dynamic in 2002-2007 was positive. In 2008 we clearly see the same risk aversion and now, since the crisis still holds, the JPY continues to strengthen. The stock market has shown some pullback from the bottom, but we hardly can call it as a new bull trend. 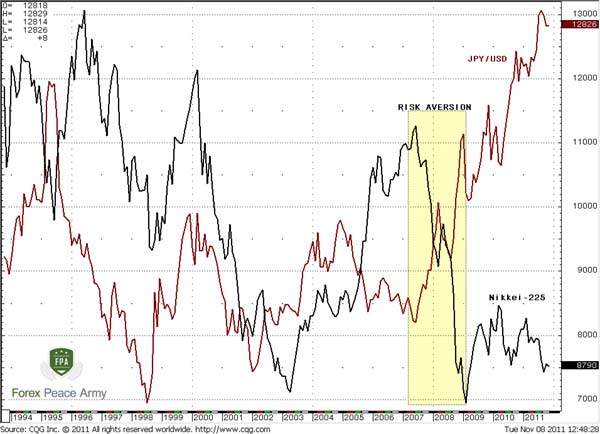 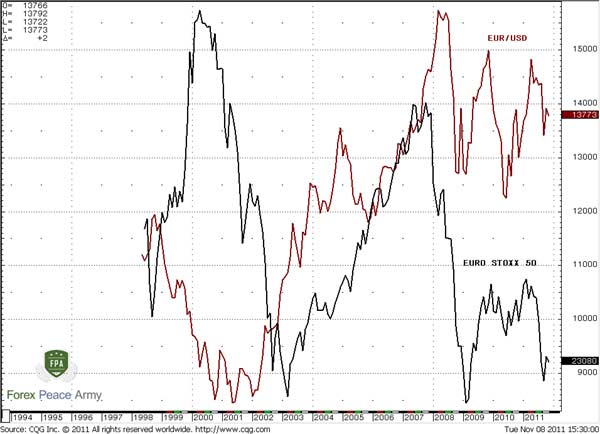 ​At the first look, in the EU there is very poor relation, but taking a closer look it seems not bad. Growth in 2002-2008 was in currency as well as in equity market. The stock market has turned south a bit in advance of EUR. Direction of current fluctuations coincides with each other. So, the intermediate conclusion is that “safe-haven” currencies show significant deviation from the theory of one direction move of equity market and currency. Example of EUR shows that it can hold in other currencies. And what about emerging markets? 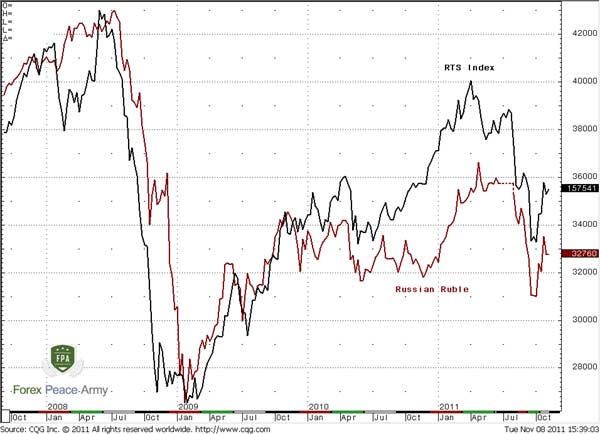 ​
What a correlation - impressive, right? And what about other emerging markets, let’s say – Brazil? 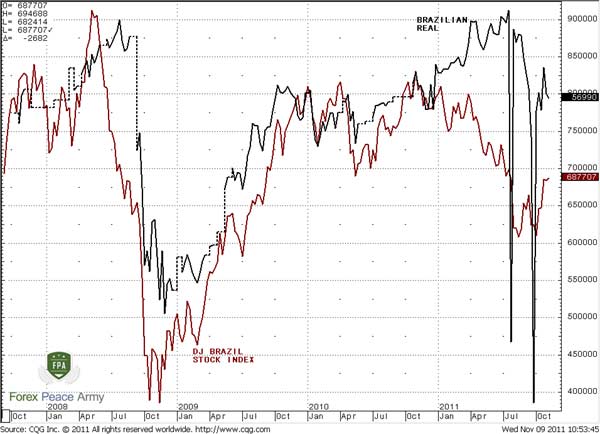 ​
It looks the same – much stronger correlation between the stock market and domestic currency. So, we might say that sometimes this theory works perfectly, but sometimes not. Why?

The answer is simple – the less geopolitical value a currency has – the stronger the relation between domestic currency and the stock market. The point is that emerging markets are treated by investors in a crowd. Investors do not separate currency from the stock or even bond market. These markets are treated as a market where you can get some enhanced return on investment, when the world economy is growing. When the world economy falls into recession, investors abandon emerging markets, since they have too much risk. That’s why plunge come in all markets – stocks, currency and bonds. Investors can’t treat Brazilian real or Russian Ruble as a safe-haven.

And, finally, third – safe-haven currencies have the smallest relation with national stock market, since this relation is skewed by their extraordinary role in the World economy. Besides, just compare what is the Swiss stock market and what is Swiss Franc for global economy – absolutely different things.

Commander in Pips: Finally we come to the last topic. Here I will ask and you will answer, since I’ve explained to you in detail the foundation of the stock and currency market relationship.

What comments can you give about relation between DAX-30 (or any stock market, since it highly related as with Dow as S&P500) and EUR/JPY?


Pipruit: And why are you asking?​

Commander in Pips: Because there is an opinion, that since EUR/JPY has solid correlation with the stock market during last decade – it could be used as some kind of risk barometer in the world economy and it’s implied as risk indicator. How could you assess these thoughts from the perspective of all that we’ve discussed? 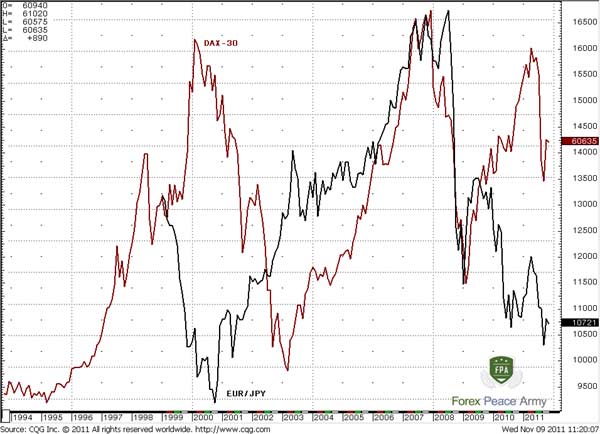 Pipruit: Well, correct me if I wrong, but based on your explanation I understand that the stock market is a result, but not the reason. The reason is economic health – both world and domestic. Stock market is just a single indicator of health among many others, and we can’t affirm that it is the most reliable – the recent behavior clearly shows that. The most reliable issue that allows to judge about the economy is macro data and its stability. That’s why we see great divergence between major stock markets and currencies. This growth should warn us, since it has no solid foundation.

Since in 2002-2008 all stock markets were in a bull trend – we see appreciation of currencies as well, but this behavior is mostly based on the world’s economy growth stage, since the stock market is just an indication of this event.

Probably, we might say, that risk indicator is a bit wider than just EUR/JPY. Risk indicator is safe-haven currencies – mostly CHF and JPY. If we will take a look at this period in the Dollar Index, then we will see that it was in down trend and didn’t support this rally. Probably that may come from too huge of a supply of USD, so even demand for it during the stock market boom can’t trigger a reversal in its value. This is tells about solid US Dollar overvaluation. We can’t call it as hidden, since it could be clearly seen, but probably we might say that the world is happy with this overpricing just yet.

Nevertheless, we see some growth appetite for USD during risk aversion periods, like in 2008, but it much smaller than in JPY and CHF.

Commander in Pips: Very good. In fact, currently we see growth on stock markets with simultaneous demand for safe currencies – either the first or the second will fall… From that perspective – remember the chart of the Swiss stock index from part #3. Since demand for CHF is growing, but stock market is not – it means that investors do not put money into the stock market. They put them into bonds – if you’re interested, check Swiss Government bond yield by yourself. This in turn, means that there is no growth in the world economy, and growth in other stock markets has no serious foundation yet.

Idea to chew on

Also I just want to give you an idea to think about. Imagine that the dollar has failed. JPY and CNY can’t be the world’s safe-haven, as well as CHF, since their value are based either on currency reserves, that are in USD (Japan and China) or on strength of financial corporations (Switzerland). Even more – it turns out that as Japan as China have worked for the US for free during 3-4 decades. Since they get US Dollars for their goods, and invest them back in US Bonds to form currency reserves, which are worth very little after a failure of the dollar. It turns that the US has consumed all those imported Japanese and Chinese goods for free.

Also, the world’s largest demand market does not exist any more, the economies of both Japan and China will fall in hard times. Probably the dominating role of commodity suppliers’ countries will rise – not goods, but particularly commodities and food. Among the majors we can call CAD, AUD and NZD. I will not give you particular answer – just think about this interesting stuff.

G
gombosg
8 years ago,
Registered user
It is creepy to hear from someone who is as experienced as you, that a US default is probable, if not outright inevitable.
If I'm right, you wrote this lesson in 2011 or 2012 - the dollar still stands but since then we have heard the same from many places.

But who knows, for how long this could go on... especially because it is not just the interest of the US but of every other country holding serious reserves in USD.

p.s. these lessons are awesome. The rabbit's hole is so deep...