Pipruit: Greetings Commander! I’m a little confused about all this stuff. I mean we are already discussed so many details, and I understood a lot more now. But can you give me some overall picture? I want to be able to see all the parts of the FOREX market. I just can’t put these important details into whole puzzle yet.​

Commander in Pips: Ok, what particularly do you want to know?


Pipruit: First of all, I want to know how FOREX functions in general.​

Commander in Pips: Ok, I’ll give you just basic information, because we should not get too far ahead of ourselves – you will get detailed lessons about the structure of the FOREX market a bit later, but sometimes it’s useful to get a quick glimpse forward.


Pipruit: All right! Besides, I should have at least some understanding of how the FOREX market functions before I try to trade in it.​

Commander in Pips: Agreed. First of all, as opposed to exchange markets, where all transactions are made following exchange rules and procedures (the stock market at NYSE is a good example), and all transactions are served through a central processing clearing center of exchange – the FOREX market doesn’t have either a processing or transaction center or even a definite location. This is also a market without major central regulation and processing authority. This type of market is called an “over-the-counter market” (another example of this kind of markets is the bond market). In fact, this is just a huge community of different participants – individuals, FOREX brokers, hedge funds, banks and others. The structure of the FOREX market is very similar to the Internet, where all participants are linked with each other. Can you show me an Internet major center and major server? Where is it and who rules the Internet?


Pipruit: I guess not, it sounds like nonsense. But what is the basis for FOREX functioning?​
Commander in Pips: Well, sometimes the FOREX market is referred to as the “Interbank” market because the major participants in the FOREX market, as we’ve already talked about, are banks. The whole market works electronically in 24/5 mode due to how the banks network. It is spread all around the globe. The feature of an over-the-counter market is that, at least theoretically, every participant can choose with whom he wants to trade depending on reputation, trading conditions and pricing.

Pipruit: In general I think I understand that. Your example of the Internet helps me a lot.
​
Pipruit: I’ve got a second question that I’m interested in. Where do those $3.98 Trillion that you’ve talked about go? I still can’t imagine the whole power of the FOREX market and how all the money moves.​

Commander in Pips: I guess, it will be better if I’ll show it to you. Let’s take a look at currency structure of the market and transaction structure. As we’ve talked about before, the daily turnover on FOREX is about 3.98 Trillion USD - $1.49 Trillion stands for spot transactions, $1.765 Trillion in FX swaps, $475 Billion in outright forwards, $207 Billion in options and other products and $43 Billion in currency swaps. We are participants in the spot part of the market. Also I will show you what currencies have the most trading volume: 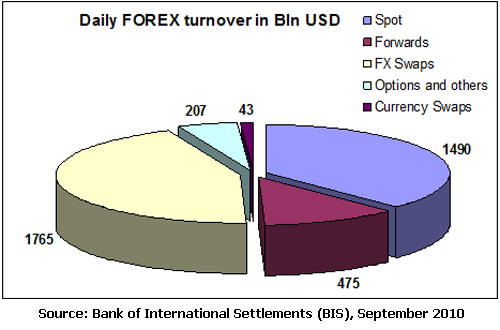 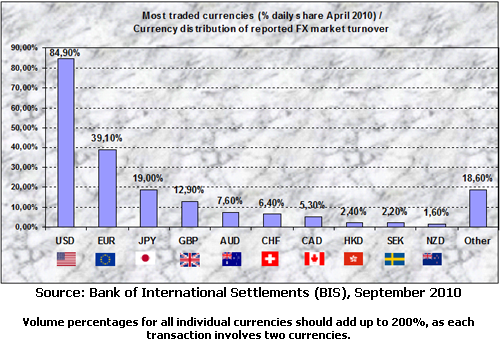 
Pipruit: And why does the US dollar so greatly dominate in all FOREX transactions?​

Commander in Pips: Well, this happened for historical reasons. The point is that after WWII, the European economy was ruined and the world needed some strong currency to rebuild international finance. Until the 70s, the US Dollar was tied to a “gold standard.” This meant that it could be exchanged for gold at a fixed rate without any limitations. The US economy was not heavily touched by war actions and was relatively strong. Due to these circumstances the US Dollar became an international “reserve currency” and the main currency that serves international trade. Even when the gold standard was cancelled, the dollar was already strongly spread through the world economy and continued to serve most international transactions. Not one other country has ever had a currency with similar qualities. So the dollar continues to stay on as the world reserve currency and still dominates in all international trade, because the majority goods are quoted, bought and sold for prices in US Dollars. There are some additional reasons why the US dollar strongly dominates over all the other currencies. The US has the largest economy and financial markets and a stable political system. The most important thing is that since the US currency is also a world’s reserve currency, this means that US dollars have no currency risk beyond normal changes in the exchange rates. Some countries have called for alternative reserve currencies, but those proposals haven’t ever gone very far.

Here are some numbers for you. See, the USD continues to hold a leading position among other currencies. It means that almost every person, bank and organization has some assets in USD. That’s why it’s so important to pay attention to the value of the USD. Although the chart shows a growing share for the Euro in recent times, the USD still holds more than a 60% share of foreign reserves. So, the Buck is the Boss! 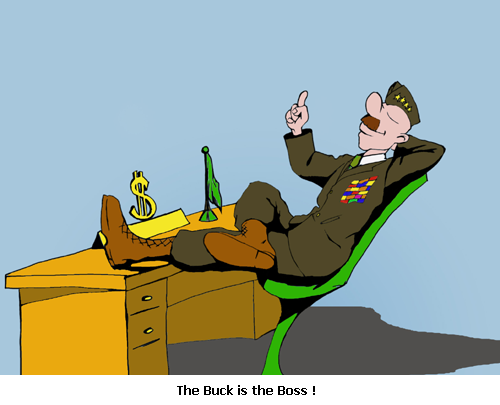 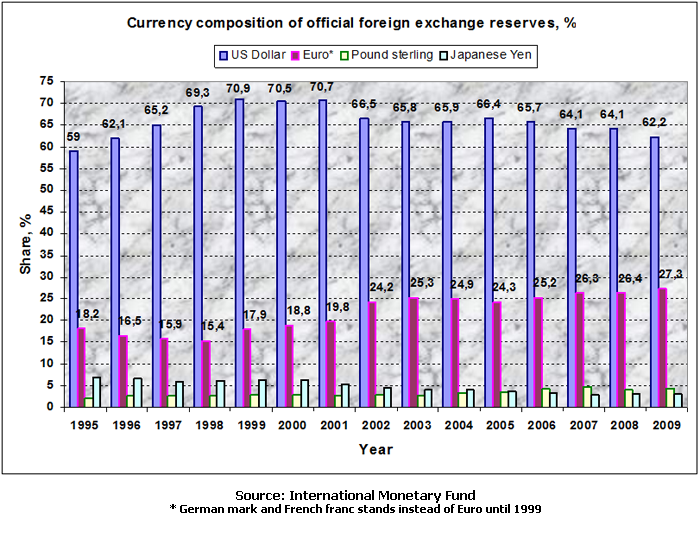 Pipruit: Hmmn, I still can’t believe that all this currency, as you’ve said, almost $1.5 Trillion dollars of spot market are available for delivery. Are they really physically transferred from one bank to another, then to another one and so on?​

Commander in Pips: Actually, not. Note that 80% of all transactions on the FOREX market have a speculative nature. It means that the organization or person trading does not intend to take a real delivery of currency and just wants to gain profits from exchange rate fluctuations, basically on intraday trades.


Pipruit: It sounds like you are talking about me. And why is this so important?​ 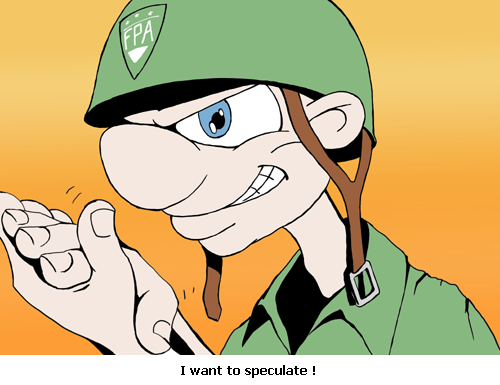 ​
Commander in Pips: Well, the highly speculative nature of the FOREX market tells us much about its specific properties meaning that: At the same time, as we’ve discussed already, the liquidity can vary depending on what currencies you’re trading. In general, liquidity is higher for major pairs and lower for exotic. Also it can vary due to trading hours and other circumstances, but we will talk about it in another topic.


Pipruit: Thanks a lot. Finally I have some idea about the real structure of the FOREX market.​

V
Vcorreia9
10 years ago,
Registered user
Looking forward to see your posts again so to the viewers that will also shared their opinions because I really appreciate how you put time in your site it is very well arranged and I love the way how you share your information with us.

Just to share with members who are reading that in some countries, there may also be restrictions of how much of one currency can a bank hold. This is to prevent the banks from holding too much of one currency and then flooding/withholding the local markets with that currency to manipulate the rates, as well as to prevent a high revaluation of funds held by banks as currencies are subjected to ex-rates differentiate (as mentioned in previous lessons) . Thus banks are then forced to trade in currencies (mostly to stabilize the local currency ex-rates). Major banks across the globes hire a team of analysts and traders that deal with this aspect and quite a high percentage of the currency trading is with investment objective as well. Its likely that about 5% or even lesser of the amount traded are meant to satisfy the local central bank/governing authority. Major banks are also the major market liquidity providers for most brokerages especially those that offer ECN accounts. They compete to bid for a piece of the pie by taking trades from retail traders (us). Brokerages facilitate such transactions by bringing together these major banks

Google for any major brokers and read how they get the quotes and I can bet you that they would mention major banks. I don't have a USD1M to lost, neither do most of us. I would have won the bet, hands down!