Commander in Pips: So, now we’ve estimated that currency rates strongly depend on interest rates, and Central Banks use them as one of the major tools to govern economy and stability. All that stuff makes up monetary policy. Still one question remains – how particularly does a Central Bank announces its monetary policy. What for we have to expect, how it usually happens… 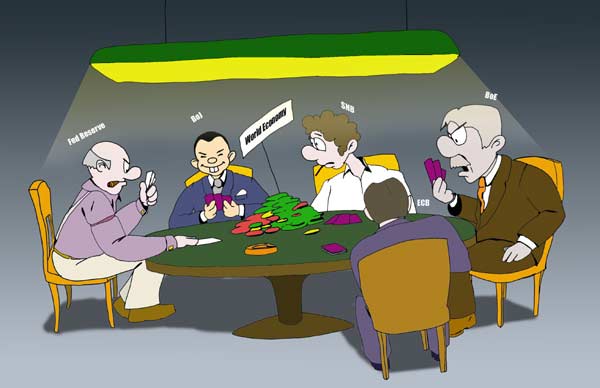 ​
As you, probably understand, a Central Bank is not just a single man in small square room. This is a huge authority. In fact, a central bank has many more common issues with any large company than it may seem at first look. As with any company that has a president or some kind of leader, say, chairman, a central bank also has him/her. To be the chairman and representative of a Central Bank is a great honor and responsibility. So, when, say, Mr. Buffet, Bill Gates speaks in public – they attract a lot of attention and rush. So, if so much attention is attracted by people who rule just single company, should it be much more when we speak about economy of US, or EU? That’s why when Ben Bernanke or Mario Draghi speaks during regular or special testimony, almost all the financial world listens. Since everybody wants to know which way will monetary policy turn and what adjustments are coming. You better follow what they say. Our luck is that Central Banks are well-organized in terms of communication with the markets. They have a predetermined schedule of meetings, speeches, testimonies etc.

Not only central banks can determine and have impact on monetary policy, but speeches of chairmen are usually analyzed with great scrutiny. Solid financial institutions, like big banks, financial companies, as a rule have special analyst who “transcribe” Central Bank speeches into normal language to clearly understand what a central bank intends to do.


Pipruit: Hm, what do you mean – translation of Draghi’s speeches from Italian into English?​

Commander in Pips: Absolutely not. For instance, in recent statement, Bernanke said, that Fed intends to remain using the current policy during a “considerable period of time.” But how long is this “Considerable” period. A speech of any central Bank representative is full of such hints that are needed to be translated into real terms and conditions, so that some commercial bank may know what to expect.

Pipruit: And why they can’t say it straight and clear?​

Commander in Pips: Because the Central Bank does not yet know how the economy will respond to their action and what macro data will show. So if they say now that we will hike interest rates, but tomorrow they will see bad data, then they will say we will not. This will lead the market to doom and gloom. They need to be 100% sure with perspectives. That’s why they prepare markets to change gradually by changing the tone of their statement. And to grab and catch the major idea of tone shifting, big banks have a special analyst.


Pipruit: I see. In reality it seems difficult.​

Commander in Pips: Since Central Banks give markets new thoughts and direction, during a speech some market move usually appears, so be aware of it. In a general speech could contain direct information of rate changing, thoughts about different macro data and economic growth, inflation, employment, expectations of Central Bank about them and other. A very important question answers that usually holds after Central Bank’s statement, since some question could shed more light on some moments of statement.

Don’t be upset if you can’t catch live translation – all agencies will release it with details and will discuss it with world-known analysts during long time.

As we’ve discussed that macro data could shake markets if it was released different to expectations, the same could happen if a Central Bank statement is different to anticipation and the overall sentiment and opinion of the market. There is always odds that exist that a Central Bank could change its opinion on economic perspectives, change its own expectations and forecasts on some major economy data, say, inflation or do something like that. Particularly in this time we need to be extra careful, since the market falls in volatility splash. So, control your risk and think twice before opening new positions near the time of these speeches.


Pipruit: But how does a Central Bank make decisions about interest rate and overall policy?​

Commander in Pips: Well, that’s important. This decision is made by a vote of the Board of the Central Bank. Results of voting are usually public. So, you may see how many bankers were for hiking of therate and how many against this. Even more, usually the members of the Board are chairmen of some Reserve Bank, say Philadelphia Fed Reserve. They are also public persons and often give an interview, where each expresses his or her own opinion on the overall economy. This opinion is not always in a row with overall Fed Reserve policy, since bankers watch the current situation differently – some of them think that it’s time to struggle against inflation and start to hike rates, while others think that growth is too anemic and it’s better to hold interest rates low. Sometimes former view is called “hawkish” and latter is called “dovish”. Dovish opinion assumes priority of growth and low interest rates over inflation. Also they are the followers of smooth action on specific events in economy. A Hawkish view is a vice versa - assumes low inflation as a primary task.

So, when a Central Bank changes their view on some important data, that assumes more probability of hiking rates, usually it calls that Central bank now is more hawkish. For instance, if the Fed will suddenly say that they see solid risk of rising inflation, even if they will not raise interest rate – this will be clear sign that Fed Reserve becomes more hawkish.