Commander in Pips: Now let’s talk about fundamental analysis, just in very general terms, as we already did about technical analysis. We will just point the major qualities of it. Once you’ve said that didn’t attend an Economics course in School. It’s a pity, because if you did, then the nature and subject of fundamental analysis would be easier to understand for you.


Pipruit: So, may be we should skip it. Besides, I think I like technical analysis already.​

Commander in Pips: No way! I need to get some pleasure to see when you will suffer over it. 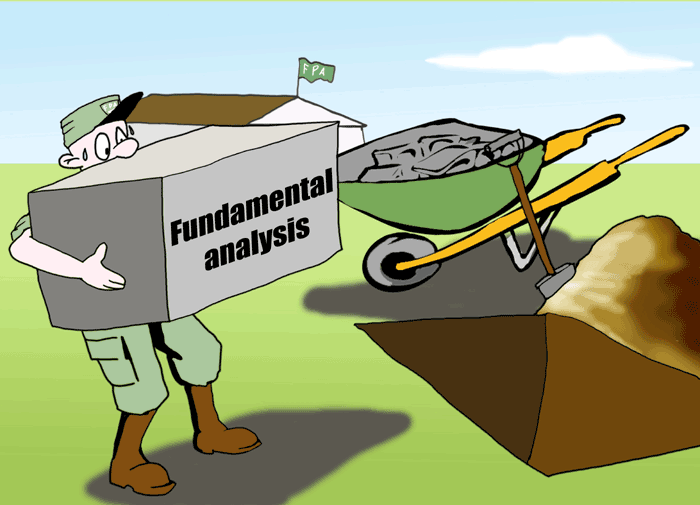 Commander in Pips: …just kidding. But, seriously speaking, fundamental analysis is a real THING and TOOL. Besides, it’s very interesting and useful to apply it.


Pipruit: Hmm, may be you’re right. Anyway, I can’t say definitely, until I’ll try it​

Commander in Pips: That’s right. In the beginning of our talk I just reminded you the major rule (since you skipped taking an Economics course), that the price of any asset is determined by demand and supply. So, if the demand becomes higher than the supply, then price starts to increase. If the supply becomes higher or, which is the same, demand becomes lower – then price starts to decrease. So, the subject of fundamental analysis is the investigation of which factors can and do have influence on demand and supply, and, in turn, on price and make price to change. Although there are a lot of such factors, all of them are well-known, as well as their possible affect on demand and supply. So, . . .

Fundamental analysis is dedicated to the investigation of economic, political and social factors that have an effect on the currency value of a particular country relative to other currencies and the forecasting of these factors.

Because, we trade currency in pairs on Forex, we need not just a single look at particular country, but also a relative assessment of both currencies and, hence, the countries in pair.

Generally speaking, if the economic perspective of some country is good then its currency should become stronger, other words, its rate should increase. Using fundamental analysis you will know which factors allow to assess this perspective, and to make a judgment about strength or weakness and why.

Since we trade currencies, our major task is to find out the perspectives of particular country, relative to other countries, depending on what we are trading. If, for instance, you trade EUR/USD pair, then you should analyze EU and US economic perspectives, closely watch for any news and changes there, track macro data, including historical ones, check the pace at which it is changing, etc. If you come to the conclusion that the US economy is in better condition and has a higher pace of growth and better perspectives than the EU, then, you should buy USD for EUR. Simply speaking,the better an outlook for the economy of particular country the higher currency rate.

I will give you a simple example of how in general fundamental analysis works.

Let’s take into consideration current situation. In 2008 there was a total collapse in economy. The Fed decreased interest rates almost to zero, economic growth in terms of GDP has fallen significantly to negative numbers, and we see growth in unemployment and drops in corporate profits. How we can explain that from perspectives of fundamental analysis?

Collapse leads to huge reductions in industrial production and service. This in turn, leads to reducing prices on commodities, because companies reduce production and do not produce as much as before the crisis. Hence, they do not need so many raw materials for production. Due to this reducing of production the revenues and profit of companies also decrease significantly and companies have to fire employees to decrease expenditures. That’s why unemployment starts to rise. Due to this reason we see strong down trend on equity markets and commodities. Because so many people have become unemployed, they are not able to pay on their mortgage and other loans and demand as many services as they did before the crisis. That’s why retail sales and personal income/spending are also reduced.

And what is about perspectives? Now we see that when Gross domestic product rises about 3.0% on average, unemployment starts to decrease, other macro data shows an improvement in economic conditions. Prices on commodities start to rise, and this is a first sign of inflation growth. To limit inflation the Fed in medium-term future will have to increase interest rates. This in turn will lead to higher rates on the Bond market and higher rates on deposits that are denominated in US Dollars. It means that the US economy becomes more attractive for investors and they will want to invest here, because here they can earn higher yields with low risk. But to buy any assets, denominated in USD, they need dollars, so they will have to buy dollars first. This means, in turn, that US dollar should become stronger and its rate should increase if the pace of economic recovery will hold or even accelerate.


Pipruit: Cool! I can’t even imagine that fundamental analysis is so logical. It’s like math. And will I be able to do it by myself?​

Commander in Pips: Sure, why not. All you need is full understanding of the economic process, how this or that political event or a new law can affect the economy's pace and about all the important factors and their influence on economy.

Later in our course we will cover all necessary components of fundamental analysis. So you will learn how macro data drives Forex rates and why, understand who is the Fed and ECB chairman and why they are economic whales, major fundamental data that shows the economy's health and condition and how to analyze it for making a trading decision. After our course you will be able to argue with those smart guys on CNBC about US Dollar's perspective in the studio directly. Ok, you may not be ready for that, but you will absolutely understand their logic and lines of thought, so you may reasonably agree or disagree with them.

But currently just remember that the subject of fundamental analysis is assessment of a country’s economic strength to make decision about the perspective for its currency.

Would you plz give me an idea how should I receive the instant major economic news release.


I have read few of your articlew regarding NFP influence on forex market and I would like to say your advice are very helpful.

Since I am a new in Forex I would like to get as much information as I possible can.
Is there any empirical studies done showing influence of NFP and retail sales on Forex market.
I would be very grateful If you send me possible links of these kind of articles if you are familiar with it.

Thank you and best regards
Matic

Would you plz give me an idea how should I receive the instant major economic news release.

Hi Zakir,
If you would like to get data almost second-to-second - you will have to buy some news stream, usually this kind of service is not free. But you just would like to see the data with 3-5 min lag, you can do it on Bloomberg.com or on the sites of Forex retail brokers.
Also, you could be interested with this link:

This is our software for news trading.


I have read few of your articlew regarding NFP influence on forex market and I would like to say your advice are very helpful.

Since I am a new in Forex I would like to get as much infor..

Hi Matic,
personally I rare trade data releases, but you can ask in corresponding thread of daily signals. Maybe somebody has made some statistic analysis of this. Because our analysts on day trading usually tells how much currencies could jump, depending on data deviation from expected numbers. It means that we have some statistic on this subject.