Commander in Pips: So, we’ve covered that a government with and via its Central Bank forms its own monetary policy. Monetary policy is necessary for achieving some goals and some of them could depend on other Central Banks of different countries. This happens because the current world economy tightly integrated and globalized. The simple example is cooperative work of the US Federal Reserve and the Peoples Bank of China, since the US is the largest consumer of Chinese goods, while China is greatest holder of US debt. So, there are multiple questions that the Central Banks of these countries should decide together, since their economics strongly depend on each other. 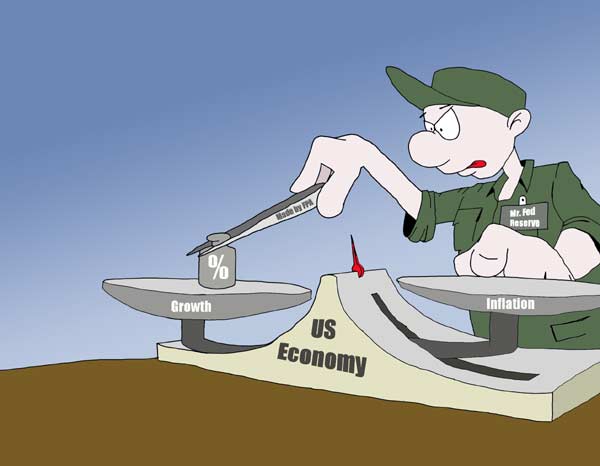 Generally speaking, the major aim of any monetary policy of any Central Bank is to find equilibrium between inflation and economic growth. That is the same as maintaining price stability and economic growth pace stability, and to achieve these points, a Central Bank will apply its own monetary policy that could adjust in desirable way some factors:

- overall money in turnover (also referred to as money supply);


Pipruit: All right, but how we can understand what kind of policy currently stands?
​
Commander in Pips: You can catch it on the steps that each Central Bank makes. There could be just two major ways of monetary policy – easing and tightening. A tightening policy also calls as contractionary or restrictive, since it applies to hold onto inflation, to contract it, tighten excessive money supply. The opposite monetary policy is a policy of easing, since it us used when Central Bank wants to make economic growth easy, liberalize interest rates and expand growth. Do you understand something?


Pipruit: I guess. So, Contractionary policy is applied by a Central Bank when the economy becomes overheated and inflation growth is significant. To tighten up excessive money and reduce inflation, the Central Bank starts to raise interest rates. The cost of money gradually increases, borrowing become more expensive, so companies can’t support growth at the same pace because it becomes less profitable. As a result, the economy start to chill, demand for raw materials and commodities decreases, their price stops growing and bingo – goods prices also become stable – inflation is bridled.

The easing policy or expansionary applied is by a Central Bank when the economy falls into contraction and the pace of growth is significantly reduced. Usually, when an economy is contracting, inflation stands near zero or even could be negative, since demand for goods decreases or is stable, as production. Then more people turn to saving, since rates are high. In such circumstances the Central Bank has to stimulate growth. For that purpose it reduces interest rates. The cost of borrowing starts to decrease while it becomes attractive to invest in companies and to finance development. All participants start to borrow more – companies to invest into development, the public to purchase different goods and real estate, since it becomes cheaper. The economy turns to growth.
​
Commander in Pips: Right, so in a few words –A tightening policy applies when a Central Bank struggles with inflation, while an easing policy is when it tries to stimulate economic growth.


Pipruit: Sir, is it possible for an economy to stand relatively stable and not demand any shock therapy? What do Central Banks usually do in this case?​

Commander in Pips: Of course it could. Well, they try to support current equilibrium between growth and inflation and to make it so that this balance holds as long as possible. This is called supportive or neutral monetary policy.


Pipruit: And how they decide when and what policy to apply?​

Commander in Pips: Well, each Central Bank has its own breakeven numbers for inflation, growth and a lot of other different indicators, such as unemployment that each calculates on its own methodology, as well as the Central Bank’s preferable values. When some of these numbers reach a breakeven number or start to change together in one or the other direction, showing some tendency in the economy, the Central Bank starts to adjust monetary policy.

On average for mature economies, acceptable inflation should be no more than 1.5-2% per year. This number is treated as healthy inflation that is correlated with moderate growth of the economy. When something happens that leads to splashes in inflation to the upside or to the downside – it needs to be explained by Central Bank.

For example, not a long time ago (beginning of 2011) there was splash in commodity prices. Investors have become worried, since commodity prices are a leading indicator of inflation. But Ben Bernanke, chairman of the Federal Reserve has stated in his testimony that this is a temporary event and the Fed Reserve does not expect some stable growth in commodities, and inflation will remain anemic (inflation was near zero, since there was a recession in US).

That speech cleared out the situation and investors calmed down, since the Fed gave them a hint that it will not change its current policy, since this is just a temporary splash in prices.

The same could happen if, say, you’ll see that some macro indicator – inflation (PPI, CPI), Unemployment, GDP etc that will show some extraordinary change. Surely it will lead to some short-term volatility growth due to speculators’ activity, but the market will wait for reaction from the Central Bank, because the economy needs to be stable. Investors like stability, the same as Central Banks. So, as Treebeard in Lord of the Rings said “Don’t be hasty”.

From the points that all participants like stability and we have not to be hasty, we come to the conclusion that a Central Bank will usually adjust policy very gradual by small steps. It makes it not because of just stability, but also because it needs to see how much this adjustment will impact the overall economy. Usual adjustments of the interest rate is 0.25-0.5% and cycles of increasing and decreasing could last for 1-3 years. Downward adjustment usually comes faster, as in any market and steps could be bigger - 0.25-1%. But changing rates for 0.5-1% usually happens during real problems in economy, like it was in 2008.

When you plan some trade, you collect all the necessary data, analyze it and only after that pull the trigger. A Central Bank does the same thing, but it plans not just a single trade but the whole domestic economy. Also keep in mind that real production has some momentum, so the economy could show some lag in responding to changes in monetary policy due to this momentum for as much as 1-2 years. This is another reason for cycles appearing.