Commander in Pips: Ok, let’s start with types of breakouts. It’s obvious that we can point to just two types of breakouts – continuation and reversal. Depending on the type of breakout that you see currently on the market, it will help you better understand the big picture of the market, since any real breakout shows a strong change in demand and supply of a particular currency and could lead to an extensive move in one or the other direction. An extensive move, in turn, is a great opportunity for trading. 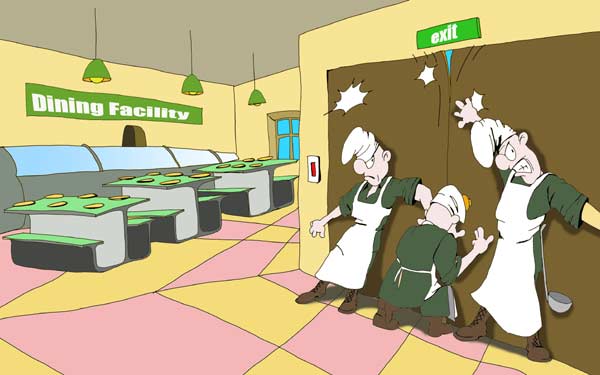 We already know that the market does not just move and move continuously in some direction. From time to time it takes some pauses, that we call “retracements”. Retracements could be different as in term of time as in shape. It could take a shape of smallest flags & pennants, triangles, rectangles, sideways consolidations etc. But for terms of breakouts, more suitable are consolidations that last for some extended time. Otherwise the fact of breakout looks unclear. 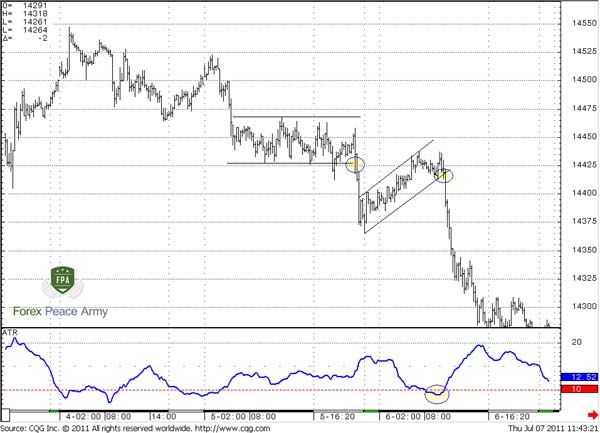 Pipruit: Cool. But, Sir, during horizontal consolidation we see also a fake out, that looks like a W&R, right?
​
Commander in Pips: You’re right, we discussed that previously. But now we will not stop on that, since we speak about continuation breakouts. As you’ve noticed, the first horizontalal consolidation was rather choppy and stopped out a lot of the public, I suppose. Although it still has finished with a continuation breakout, probably we would have wanted to skip it, because it was rather choppy and unclear. ATR also has not shown a solid decrease in volatility. As a result, the truth of potential breakout was under question. But the next consolidation in shape of parallel channel was perfect – a strong decrease in volatility by ATR and no fake outs give us much greater confidence about a strong move in the direction of the breakout. Also, take a look and see that ATR gives you an almost perfect point to enter – when the market shows a small retracement to 1.4430, ATR has reached minimum below 10. 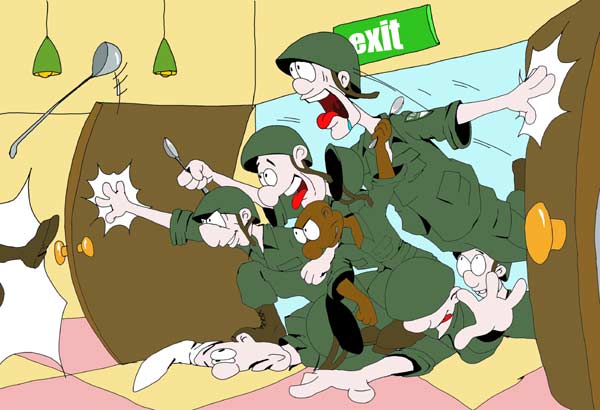 As you can see from the name – this type of breakout is opposite to the previous one. Here the market shows a break in the opposite direction to the previous trend that was happening before consolidation. Still, the initial move of both breakouts looks similar and you do not know the direction. A reversal breakout starts as a continuation one – initial trend and that take a pause in the way of consolidation. But further development is different. If market participants decide that the previous trend is exhausted then you’ll see a breakout in the opposite direction: 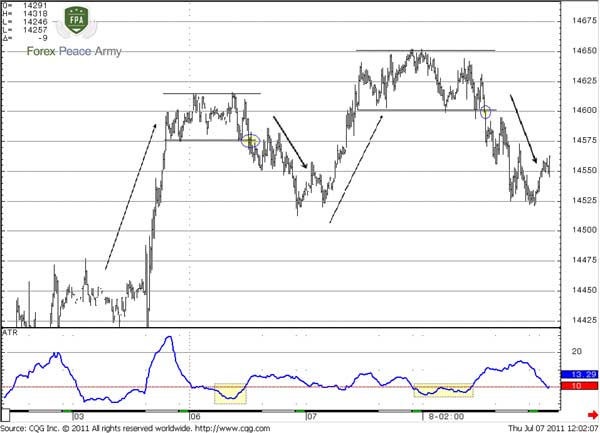 ​
Here you can see two examples of reversal breakout. During the first breakout, ATR has confirmed its truth by moving below 10. Although right after the breakout, the market has tried to return back, price action was choppy and didn’t lead to significant growth of ATR – still, this breakout was real. The same as with second one -ATR gives excellent chance to enter, since its bottoms coincide with tops of price and it shows growth even before the breakout itself has happened.

Commander in Pips: That’s right. This is one of the qualities of reversals – they do not happen just occasionally. Reversal is an important change in market sentiment. That’s why usually it accompanied by other signs… Or had you forgotten that?


Pipruit: No, no, Sir – how could you think that? (Doesn’t he think that I’ve really forgotten that and just wants to have me cleaning the mess hall for next two more weeks, ha…)​

Commander in Pips: All right then…

Well, we already have talked about that before, so you may apply the same rules that we’ve appointed during discussion of trend lines, channels breakouts etc. Applying to sideways or slope channels and consolidations, a false breakout tells us that the market should at least reach the opposite border of consolidation. Usually false breakouts should not last for a long period of time. How can we deal with them?

1. Before entering due to a breakout that you see, even it has been confirmed by ATR or other indicators of volatility, be sure that the market will not return back inside the consolidation during next 3- periods;

2. Conservative tactic assumes that you can enter only when the market will show a second top/bottom in the direction of breakout.

This could lead to missing some trades, as on chart #3 for example, when price will fall like a stone. But this is a part of this business: 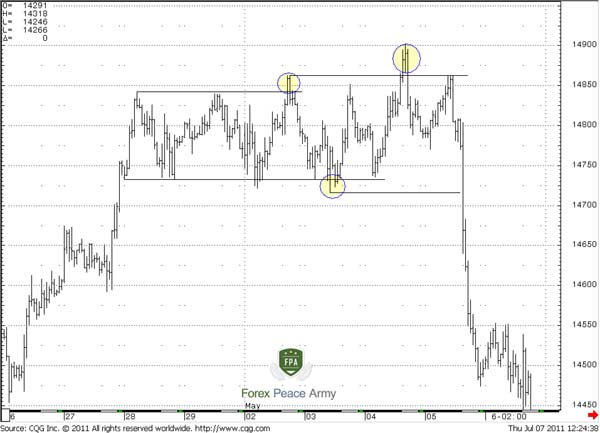 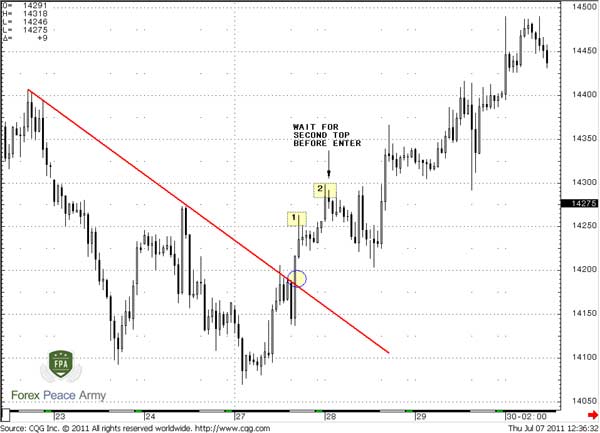 Chart #4 shows the conservative tactic that allows you to struggle against false breakouts. Applying this rule, you have to wait while price will return back to the broken border of the consolidation channel or trend line and then will establish a new high or low, depending on breakout’s direction. Here you will get more confidence that the market really intends to continue to move in the direction of the breakout. The other side of that is you will enter at worse price or even miss the trade if price action will be explosive, as on chart #3.

Also, it is better to apply this tactic if the market has not passed yet in the direction of the breakout the distance equal to consolidation itself, since, this is a minimum target of breakout. I hope that you didn’t forget that also.


Pipruit: And if so, what does it mean – that the market will not continue its move further?​

Commander in Pips: Not necessarily. It just gives you more safety, since you will have some reserve room for price moving if the market has not covered this distance yet. This kind of trade just has more probability for success than those when the market has already reached its minimum target.


Pipruit: And how we should trade them?


Commander in Pips: How to trade breakouts of consolidations we’ve discussed in Chapter 14, when we’ve talked about different classical patterns. Since channels, rectangles, triangles and wedges are in fact consolidations, trade them as we appointed.

Just to remind you, the common approach to trading them is that usually market shows a bit in advance that it intends to make a break and gives us some other signs. This usually shows in some kind of candlestick patterns in combination with trend support.

As an example let’s take a look at the same chart as on #1 but with MACD: 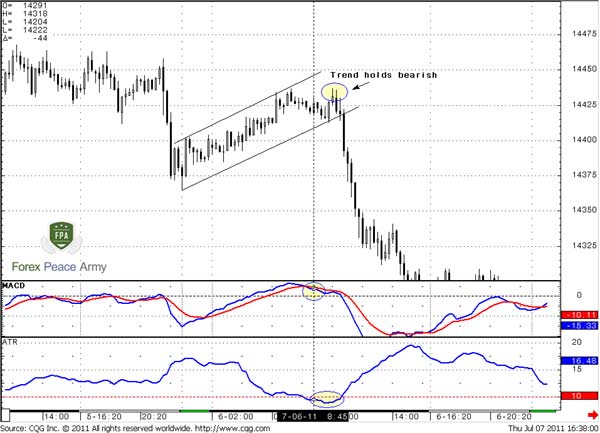 See – trend has turned bearish far ahead of breakout. ATR confirms that if a breakout will take place – it probably will be real. Even when the market has shown some up move right before the breakout, MACD holds trend bearish - that was excellent confirmation that breakout will be to the downside, and probably it will be true.


Pipruit: Oh yes, I suppose I start to remember it, we’ve discussed something like that. Looks like I have to re-read chapter 14…

Commander in Pips: Right, then you it also will remind that the shape of the pattern could also be a clue and give you a hint about direction of breakout.


Pipruit: What do you mean?​

Also apply the 3-period rule and other rules that we’ve specified when speaking about support and resistance levels.
And the last thing that I want to discuss today is application of MACD Histogram for assessment of potential breakout. But tell me first, what MACD Histogram indicates?


Pipruit: Well, it shows the distance between MACD lines.​

Commander in Pips: That’s correct. Precisely speaking, it shows momentum (do not confuse this with the Momentum indicator). As the histogram gets higher – as difference between MACD lines greater, hence current market momentum is stronger. When some trend develops on the market we want to see increasing momentum, when price accelerates in the direction of the trend. If that does not happen, and momentum does not support further development of the trend – then this trend has problems and can come to an end – look at the chart #6: 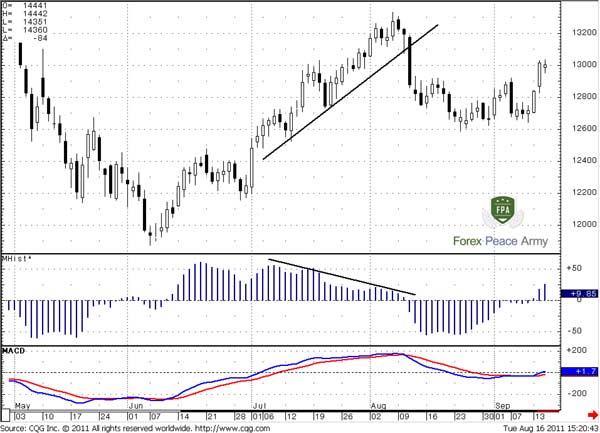 ​
Pipruit: Commander, but we’ve spoken about that already – it calls divergence!​

Commander in Pips: Not quite. Although it looks like divergence, but this is another kind of divergence – do not mix them. I better call that as momentum decreasing. Take a close look at MACD itself – do you see any divergence?

Commander in Pips: That’s it - there is no classical divergence that we’ve discussed. MACD supports the trend well. But momentum of this trend based on MACD histogram becomes weaker and weaker. And what do we see then – boom! Breakout….


Pipruit: Cool stuff!
​
Commander in Pips: So, we have to keep an eye on the MACD Histogram also, since this is quite another indicator and lets us show things that simple MACD does not. It could give you an early warning that the current trend becomes weaker and breakout is close. Even more, this kind of divergence as you’ve called it, tells us that this potential breakout will have nice chances to be real.