Commander in Pips: To estimate the value of an Exponential Moving Average (EMA) you need to the same three things:

1. Specify number of trading periods that must be included in calculation; 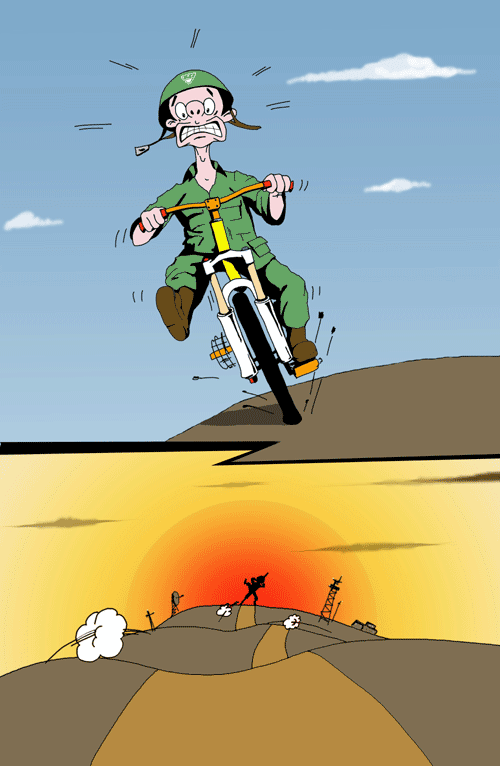 ​
Pipruit: And how is that?
​
Commander in Pips: A bit later I’ll give you formula and we will try to estimate the value of some EMA, but let’s point out the first major difference between SMA and EMA.


Pipruit: I remember, in previous part you’ve said that in SMA calculation each number has the same weight, so equal impact on overall value of SMA. But EMA points different weights, depending on recentness of each number – more weight have most recent numbers and less weight have most early numbers.​

Commander in Pips: That’s correct. Let’s return to our calculation of 7-period SMA in previous chapter:

Now let’s assume, that on 6th day was macro data release near the close of the day and it was terrible, so that market has closed not at 1.3978, but at 1.3350, what will the number of SMA then?

Hm, it could drastically change a trader’s attitude to overall market situation. Because, although recent price action looks bullish – just single day can turn the SMA to the downside! And we estimate the possible short term trend as bearish.​

Commander in Pips: That’s right. Here you can see, how equal weight for each number impact on the overall value of SMA. And it could change direction only due some extraordinary price action in a single day. But there is another way of averaging that exists. Using it could smooth out this bug. This is the Exponential Moving Average. It has a formula that points higher weight to most recent numbers and smaller weight to most old days:

P(t) – is a price in period (t), that you intend to use in calculation. Usually, this is the close price;

Commander in Pips: Well, in fact, this is not crucial for you to know the formula, because software will do this automatically. But still, I suppose this will be useful, try to calculate it, at least once. Ok, I do it by myself. Let’s calculate the same 7-period MA, but using exponential way of averaging:


Here we use the same close prices and candles as in previous part, when we’ve calculated SMA. Take a note, that EMA(t-1) value for the 7th period (most distant in time) is a close price of 8th bar, that stands before our seven consecutive close prices, that directly used in calculation. Now look at the chart: 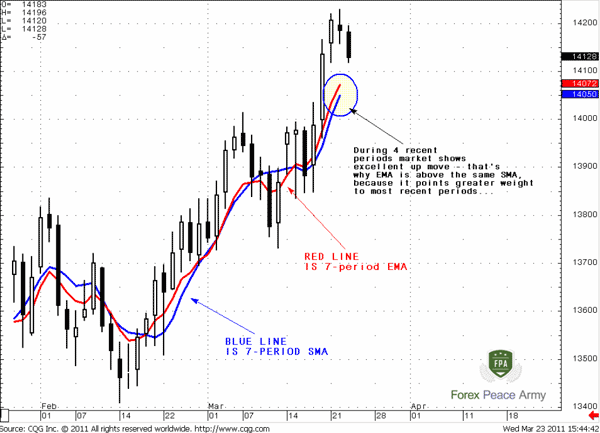 ​
Our estimation of 7-period EMA is different from software’s calculation for 2 pips due rounding. But don’t be afraid – you will not have to do this manually. Let’s better to see, how the qualities of EMA manifest compares to SMA. In the circle we see that the EMA is above the SMA. This is because during the recent 4 periods, the market shows nice thrust move up. And, as we know, the EMA puts more weight onto the most recent periods. That’s why it shows most recent sentiment more clear.

If you take a look at previous retracement, when 4 consecutive black candles have appeared – we can see the same – EMA moved below SMA and has shown sharper reaction to sentiment changing.

From this perspective it appears, that an EMA better shows what traders are doing now, than SMA.

We will not speak much about this type of MA, because it does not have some exceptional qualities. But it does exist and we just specify formula for its calculation:

Maybe, sometime you will need it.