Part I. Cross Pair – What the Beast is That?

Commander in Pips: I hope you remember what a currency cross pair is, right?


Pipruit: Well, if I did not miss something, this is a pair that does not have USD.​

Commander in Pips: That’s right. When the Forex market was young, there was no possibility to change one currency to another directly. Participants of the market first had had to change their currency into USD, and only then could change USD to another currency that they would like to have. For instance some British Lord wanted to get Japanese yen. First he had to change his pounds for US dollars, and then change the US dollars for Japanese yen. Fortunately, this time in well in the past already and now with the outstanding development of wire communications and the Forex market itself, we can change almost any currency into any other currency that we want directly. And we can do this with cross pairs, such as AUD/JPY, EUR/JPY, GBP/CHF etc. 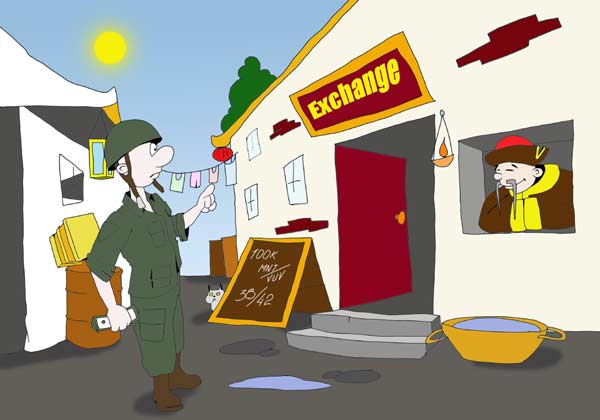 Let’s refresh on how to calculate crosses. We have discussed it in early chapters already, but you may have forgotten that, so now you will have a chance to remember. Also it will be useful if you want to understand how it works in detail.

Let’s suppose that we want to calculate AUD/CHF rate. What pairs we have to apply to do that?


Pipruit: And what we can do to reduce the probability of such losses?​

Commander in Pips: The most common approach to this is to use not just one but two MAs on the chart.


Pipruit: Anyway, I suppose that have the same common currency. Simplest answer is USD, and it may be better to use particularly US dollar due to the better liquidity of major pairs. But, I suspect that AUD/GBP and GBP/CHF also could be used for the purpose, since in this case both pairs again have a common denominator that could be used to “link” this pairs in cross rate.​

Commander in Pips: Very good. You’re right that using of USD is preferable, since we will use major pairs, such AUD/USD and USD/CHF. The bid/ask spread is tighter with major pairs; hence you will get sharper number for AUD/CHF using them. Applying for that purpose other crosses, you will include larger bid/ask spread twice, since you will calculate cross pair via other cross pairs. So we will use the first way.

So, our quote for


Pipruit: So, Sir, one thing that I can’t still catch is why trade crosses? What superb qualities do they have, compared to major pairs?​

Commander in Pips: To understand it, let’s remember what we’ve talked about in initial chapters, when we’ve discussed the statistics of the Forex market. As we’ve said, 90% of all transactions involve the US Dollar. Also the US Dollar is a reserve currency and its share is around 64% of the overall world’s currency reserves.


Pipruit: I remember how that happened, but why currently is the reserve currency not changing?​

Commander in Pips: In fact, it is. There is some flow from USD to EUR is ongoing, but this process is very slow and demands restructuring of world markets. The exceptional role of the USD is caused by the world merchant processes. Precisely speaking, the USD is the primary currency that is serving those processes. The point is that all major commodities and financial assets are traded in USD. Yes, we have exchanges as in Europe as well as in Asia, but their turnover is relatively small, compared to US Exchanges. Liquidity of the other exchanges is also less that those in the US. Hence, if some country wants to buy something, they can mostly do it only using USD, and when it sells something, it also does it mostly for USD also. If countries do an exchange of domestic currency into USD and then out from USD each time when they need to buy or sell something, they will spend much more time for that. We will skip such uncomfortable issues as currency risk, transaction costs and others. So, it’s much simpler to hold some part of a country’s assets as currency reserves. Since for the most part of global merchant deals are served by USD, hence most part of global currency reserves are held in USD also. That’s the answer. Some countries that have huge positive trading balance and the major buyer of their goods is the US have huge US dollar reserves – China and Japan are greatest among them.


Pipruit: All right, but I still do not understand why crosses have any advantages over major pairs…​

Commander in Pips: Now we pass to resolving this question. Since Globe economy on 70% (or even greater) is linked to US Dollar, then most part of transactions with major pairs are based on question “How does the US Dollar feel today? If it healthy, wealthy and strong – every major pair will be driven by USD strength, if it weak – then against USD. In other words, using any major pair you trade for USD or against it. That’s simple. The following picture confirms that. See, during 2010 most major pairs moved in the same direction: 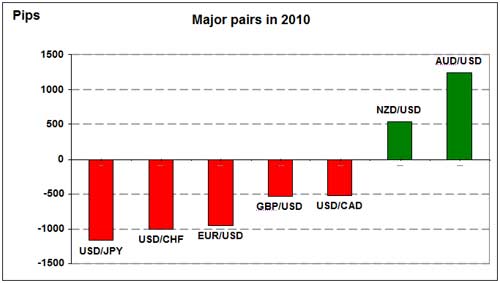 ​
All of them are linked to USD and trading them you get excellent liquidity, tight spreads etc, but do not have a lot of options and variety in decision making - mostly only to Buy USD or not. Particularly this question is driving all that pairs.

And now take a look at Dow Jones IA index. See here are 30 stocks. A trader has a lot of different approaches here – he/she may choose stocks with high/low dividend yield, some specific industry etc. Shares give more opportunities, since they are not link just with some single way of determining value. 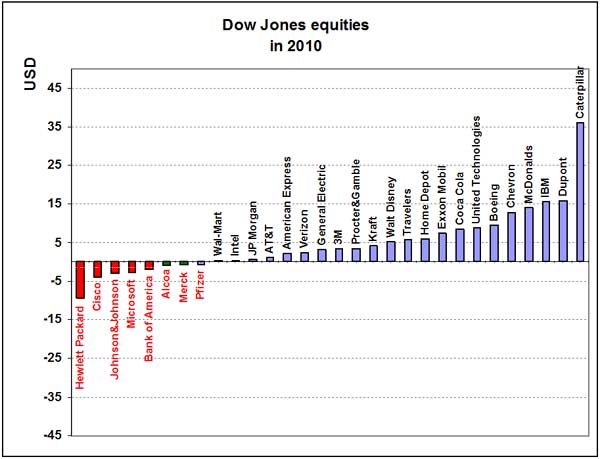 ​
Although we can easily estimate that DJIA has risen during 2010, still, some shares have shown negative dynamic. The major thought here is they give more possibilities and variants to trade and investment decision making.

So, as the crosses… Let’s assume that I don’t care about USD, why I should link to it? I’m interested in relative comparison of commodity currencies, say, AUD, CAD and NZD, or intra-Europe currencies – EUR, GPB, CHF and their relative valuation. Applying crosses gives you the possibility to take a look at Forex from a different angle. AUD/CHF, AUD/CAD or NZD/GBP do not link with USD and have absolutely different price behavior. While most of the market makes guesses about USD, you may focus on quite different questions and find more attractive possibilities to trade.

Beyond that many crosses give excellent opportunities based on rate differential, aka carry trade – for instance such pairs as AUD/CHF or AUD/JPY, but we will speak about it a bit later.


Pipruit: That’s great, Sir, I’ve got the core! What other attractive points exist in crosses?​

Commander in Pips: There are some. Tell me, where most speculators will be sitting?


Pipruit: Hm, I don’t know, probably they are distributed proportionally among all currencies…​

Commander in Pips: You’re absolutely right, but I give you a hint question. Since 90% of forex transactions involve USD… Hence…?


Pipruit: Right, hence most speculators will be upon USD-borne pairs.​

Commander in Pips: Absolutely. I will tell you even more. Since the US economy stands among the most tracked by investors, if not absolutely the most tracked – there are a lot of macro data release particularly from the US. This forces the market to be jumpy, shaky sloppy and choppy over time. Now imagine speculator’s contribution and you’ll see spikes, fakes and other kind of doom & gloom in data release days.

Commander in Pips: Right, but you can find pretty much calm price action on some cross pair, that also shows trend but without nervous procedure: 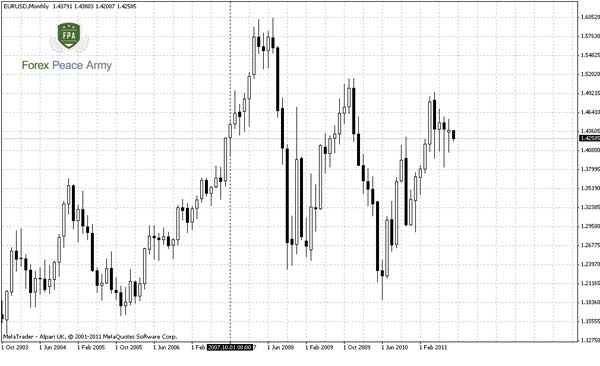 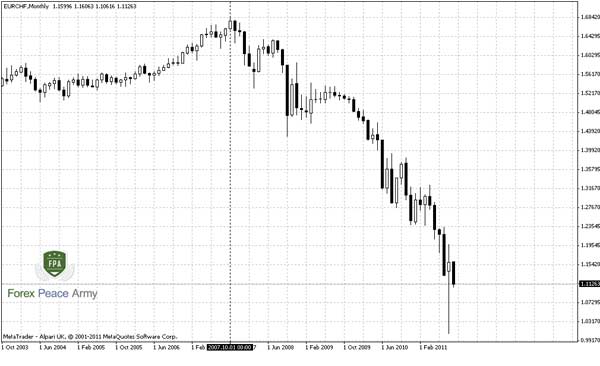 ​
Just look at these two charts and feel the difference. Once we’ve eliminated US problems and questions about the USD – we get a calm and smooth trend on EUR/CHF. Although these charts are of big scale – monthly, the same easily could happen on other time frames, even intraday.

So if your approach to trading is based on “follow the trend” rule, currency crosses could be extremely good for you. Very often they show more smooth moves, and hold trends longer than major pairs. Also they could not have so many spikes and fake outs as major pairs.