Part I. The structure of the FOREX market

Pipruit: Well, it looks like I’m starting to understand some things, but one thing is still confusing me. Where is the center of FOREX, the major transaction point, control center or something? Who regulates and coordinates all this stuff? For example, I know that on stock market, the stock exchange is a central point, because all transactions are processed by the exchange itself and in line with strict exchange rules. Does FOREX have something like that?​

Commander in Pips: You will be surprise with this, but my answer is “No”. FOREX is a over-the-counter market without any central regulator or processing center. It looks more like the global internet. All FOREX transactions are electronic and the market works in 24/5.5 mode. All FOREX participants are linked to each other.


Pipruit: Does it mean that I can sell my 50 EUR directly to the Federal Reserve?
​
Commander in Pips: Not quite. The reason is that FOREX is not a single level net, it has some hypothetical grades. I say “hypothetical”, because these grades are not fixed in reality and in any document or anywhere else, but they still exist. The point is that for any transaction on FOREX, some documentary basis is needed. If you, as an individual, want to trade on the FOREX market, you will have to sign a typical agreement with some FOREX broker that provides access to the FOREX market for individuals. This agreement should contain all the rules and definitions for transactions and trading. It may be used in the case of some disagreement or even a court case. Individual just can’t sign such agreements with Central banks, because the latter do not deal with the former due to legislative language. Also most individual can’t do that with any large bank directly, because large banks demand too much start-up assets for trading. But if you’re richer than Mr. W. Buffet, than you possibly can start directly with the largest bank. Pipruit: And what should I do then, what if a bad broker tries to deceive me and gives me unrealistic quotes for trading?​

Commander in Pips: Don’t panic, son. It’s not so awful like you imagine. The point is that for the most part, brokers who work with individuals, do not make any real currency settlements. Usually they are linked with some bank or bigger broker, who in turn links with a bank. Your broker just transfers FOREX quotes of this bank to individual clients. There are some algorithms for hedging total client positions that exist for brokers, but for simplicity we’ll say that all transactions of individuals are transferred by the broker to the bank. It appears that the broker is just an intermediate part in the chain, just a retailer. The small banks, in turn, are linked with bigger ones and also can be linked among themselves. Big international banks are linked with each other and with Central Banks. National Central Banks are linked with each other also. When I say “linked”, this means that they have some electronic connections and legal agreements for regulating FOREX transactions amongst themselves. For example, banking activity on FOREX is regulated by national and international law and also two-sided Interbank agreements. Central Bank activity is also regulated by international law and so on. And, as you understand, each part in the chain deals with different tasks. National Central Banks track the overall national currency rate; make transactions in huge volumes with other Central Banks with real settlements. They make payments due to large international contracts and make transactions with big private banks. Big private banks make transactions on FOREX due to contracts with big national companies and other clients (which can also include FOREX brokers), smaller banks do the same, but clients are also smaller. Both small and big banks as a rule have departments who work on FOREX with individuals who have enough trading assets to qualify.


Pipruit: Wow, looks big, but not very complicated. Let me repeat, what I understand. So, structure looks like this:

First of all, the market is spread all over the globe with no control or central processing center so it has no central location. It is traded globally by a huge number of participants – individuals, banks and organizations. And these participants have the possibility to choose with whom they want to trade, based on trading conditions, reputation and other considerations, but inside some hypothetical levels:

- On the ground level are individuals, who deal with bank’s exchange centers and small FOREX brokers. Sometimes, individuals can deal with large banks directly if they are rich enough and want to invest really big money in the currency market;

- FX Brokers, in turn, are linked to banks and should just transfer the bank’s quotes to individuals and individual’s transactions to some bank. This is the first level;

- Small banks are linked with each other and with larger banks not just inside their own country but around the globe; also they can make transactions with National Central Banks – the second stage.

- Large banks are the same – they are linked with each other around the globe and with National Central Banks;

- The last stage is national central banks that are linked with each other.

And all these communications have legal basis due national, international law and agreements.


Pipruit: But now I can’t quite understand how quotes for different currencies are almost the same all around the globe? I mean that a big bank and a small broker have almost the same quotes. Why do the quotes have such very small deviations on different hypothetical levels?​

Commander in Pips: Well, the answer is obvious. The major transaction volume is through the Central Banks. So they estimate and transfer their quotes to large banks. Large banks, in turn, transfer them lower to smaller banks and so on until you will see these quotes from your FX broker on your computer. Due to pure electronic quoting and transaction systems, these quotes are transferred during a fraction of a second. If someone on the lower levels will try to skew quotes to one or another side, trying to make money, they can end up getting a really big loss, because they have to predict the quotes from the higher levels. There is too much risk with it. Banks are the most highly regulated authorities and any unwelcome loss on a balance sheet is very dangerous. They just make Bid/Ask spread a bit wider to make their own money, and transfer the quotes down to lower levels. That’s much safer and simpler.


Pipruit: Does this mean that big banks trade with tighter Bid/Ask spread than we do?​

Commander in Pips: Absolutely, they even can trade without any spread, at least on major pairs.


Pipruit: It sounds logical, because volumes are much greater than on the lower levels.​

Commander in Pips: That’s right. So let’s try to imagine all this stuff in pictures: 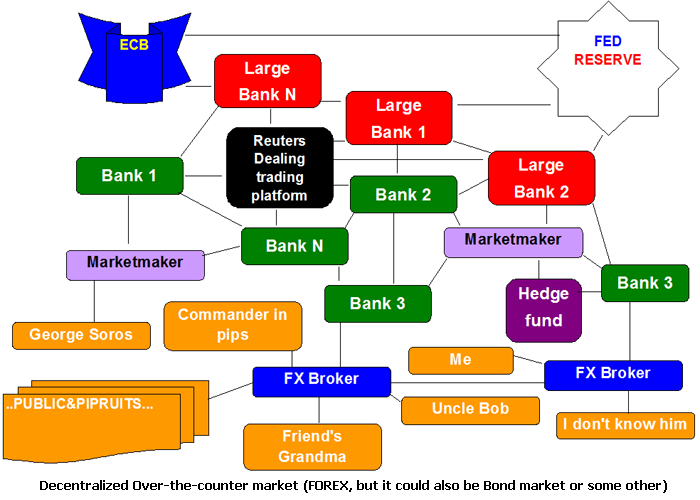 ​
Pipruit: Wow, wow, wow – hold your horses… Please not so fast. I’m totally messed up in this picture – it looks like absolute chaos out there. Say, we’ve just discussed that FOREX has a structure and then you show me this chaos.​


Pipruit: How this chaos could function at all!​

Commander in Pips: Looks like exchange traded markets is more attractive for you, eh. Well, It’s not as chaotic as it seems, because, as we’ve just talked about, there is a hierarchy that exists among the participants. The scheme above just shows you that FOREX does not have an absolute center like an exchange. But to become absolutely clear for you, let’s make another picture: 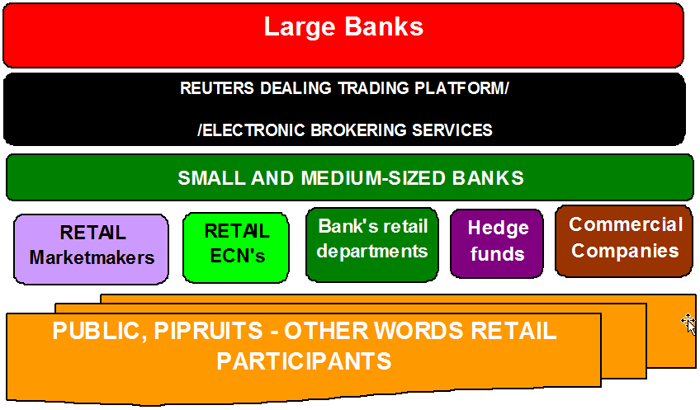 ​
Pipruit: That’s much better, thanks. But some positions I do not understand still. What are ECN and also the black rectangle – Reuters dealing trading platform or electronic brokering services?​

Commander in Pips: ECN - Electronic Communication Network. This is a type of electronic system that facilitates trading of financial products. In fact, ECN is a kind of electronic server that matches contra-side orders of participants/subscribers (i.e. a sell-order is "contra-side" to a buy-order with the same price and share count) for execution. The ECN will post unmatched orders on the system for other subscribers to view. Generally, the buyer and seller are anonymous, with the trade execution reports listing the ECN as the counter party. In fact, this is a small private exchange that has a bit different and separate regulation rules by the law in most cases.

To trade with an ECN, one must be a subscriber or have an account with a broker that provides direct access to trading with a particular ECN. The most well-known ECN is NASDAQ. An example of a FOREX ECN is accounts that use Currenex.

As for the Reuters Dealing Trading Platform or its rival Electronic Brokering Services (EBS) – this is just software that allows you to make trades on Over-the-counter markets. Counterparties can see orders of each other, put in their own orders and make deals. All participants of this software have to sign a typical agreement that is regulated trade rules via this trading terminal. Another example of such a terminal that is also ECN, by the way, is a Bloomberg Tradebook.


Pipruit: Can I also trade via Reuters Dealing or Bloomberg?​

Commander in Pips: Well, you can if you’re ready to pay about 3000$ per month for using this software… But for you there will be no sense to do that. Understand that participants of this trading software are large, medium-sized and may even be some small banks. You can imagine the value of a single trade. Second, these banks do not just trade with each other. Risk-management has forced them to establish limits on each other depending on credit quality, i.e. credit rating. The higher the rating of the bank – the greater credit limit bank can get from a counterparty bank, i.e. the greater volume of currency the bank can trade in every trade. In fact, this is the Interbank market. Other participants take part in it via different kind of middlemen, such as FX retail brokers, Retail ECN that, nevertheless still leads to small banks. Many ECN brokers link to some large bank. For example, Matchbook FX – a well-known ECN that had as members such banks as Citibank, Goldman Sachs, UBS and others.

V
vitorxpaliaga
7 years ago,
Registered user
Commander in pips, there is something I don't understand about ECN. If the system finds a contra-side order for me. Can I still close my order at any time? Does the broker charge a comission for that?

nagual_emmanuelio
4 years ago,
Registered user
I would like to add a correction: ECN is a software (like Windows) that runs on a big supercomputer. Large bank, like some central bank can allow themselves owning a supercomputer and link all its clients under it. It is incorrect to say that banks are members in some piece of software that runs on a computer. Hope that helps.