Commander in Pips: So, by now we have spent a lot of time and learned much useful information about tools and methods that could be applied in trading. So far we mostly discussed analytical approaches to trading, where the major tool is the trader himself. A trader has to not just know tools and methods of analysis and create his or her own trading plan, but also he or she has to follow it with diligence and rock hard discipline. Also a trader has to control emotions and so on. All of these we’ve discussed. Today the time has come to turn a bit in another direction – to a mechanical trading approach. We’ve given you some hints in previous chapters and now we will discuss this topic with more scrutiny. 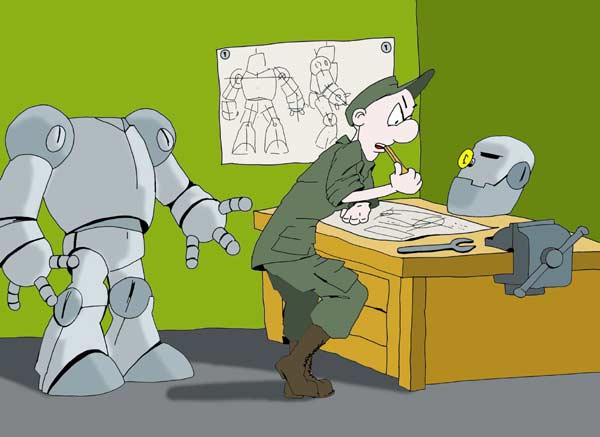 Pipruit: Cool. But why do we need mechanical approach at all? Personally, I think that an analytical approach is more suitable for me.

Commander in Pips: And have you started to trade already?

Commander in Pips: Hm. How have you decided then, that the analytical approach is better?

Pipruit: Well, probably I just feel it. But maybe this feeling comes from a lack of knowledge about the mechanical approach…​

Commander in Pips: The second answer seems more reasonable. A mechanical approach has a very big advantage that for some type of traders that could become a determinant of which way to chose to trade. Mechanical trading excludes all personal emotions and biases. It just follows an algorithm. For those who are friendly with programming, have a technical mind set, but have an absolute lack of discipline – a mechanical approach to the markets could become the only way to trade.

Pipruit: What is a mechanical system in a few words?

Commander in Pips: This is specifically a computer program that makes trades by itself without human intervention, but by a predefined algorithm, that was developed by a trader. Currently many trading software platforms have built-in programming language – Omega trade station, MT4 to name some. They have specific trading commands (buy, sell etc) and let you to write programs, i.e. mechanical systems that will make trades. You can set all limitations and use any indicators for creating a program. From that standpoint the program is the same as an analytical approach. Also it allows you to create your own indicators.

Pipruit: I see. But may be it will be simpler just to purchase this system. I see a lot of offers on the internet – just Google for them…

Commander in Pips: In fact this could be done. But I give you some reasons why it makes sense to do it individually by yourself:

- First, you will find that a lot of “developers” have a “Holy Grail” of trading for sale. Most of them offer “Super-Duper” profitable system that makes 1000%+ of profit annually and costs just some inconspicuous 2-5K USD or even a lot less. On the first view you might think that since this system is so profitable you will earn your money back easily and fast.

- Second some questions appears due to recent statement, and the most reasonable are – if this system is so profitable, it should be so risky, since, as we know that to make high profits, a system must take high risks. Another question – if it is so profitable and if they so confident with it – why do the developers distribute it at all? Why do they not use it for trading themselves?

- And finally, if you even decide to purchase some trading system, this will not resolve your problem. First, you have to decide how you will choose this system; second, you will have to test it for some time. Now imagine how much time and money you will use up to pass through just these two steps, say, with 5-7 trading systems.

Maybe it is better to spend it for your own work? Creating of your own trading system will be cheaper, probably faster (since you will be focused on just single system) and more useful for you as a trader. Besides, you will create your own algorithm and 100% understand how this system works and what might demand so tuning and adjustment, but let’s go through it step by step.

Pipruit: Wow, I tell you what – probably you’re right.
​
Commander in Pips: Still, to be absolutely honest, we might say that most of these trading systems work in some or other way, despite the fact that a lot of Forex scams have appeared. The problem is to find out it – this demands, time, money and experience. If you even spend some time and create your own system – you will be much better understanding of how this stuff functions in general. So you will be able to look at third-party system with an experienced view.

Pipruit: I also think that sounds like a good approach.

Commander in Pips: Good. With all other aspects, a mechanical approach is quite the same as an analytical one – you have to specify a definite target and create your own algorithm. “Create” does not mean to invent something really new. Trading has gotten significant developments in recent years, so to create something really new is very difficult. In algorithm creation you probably will be focused on combinations of existing technical tools, but still the way you chose to combine them will let you invent something really outstanding. But first, let’s specify two Big Whales that are a foundation of any trading system:

1. System has to catch a trend as early as possible;

2. System has to have some built-in algorithm that protects you from whipsaws and reduces its effect;

Pipruit: Hm, I see here something in common with the analytical approach too. For instance, remember trading with MA? If you apply too long of MA periods then you will have small whipsaw action but you catch the trend very late or even may not catch it at all. If you apply too short a period, then you will take a lot of failure penetrations of MA before the trend will start. And later within the trade you can get fake outs, that force you to exit early and reenter at a worse price.
​
Commander in Pips: You’re absolutely right. The problem with these issues is that they are in contradiction of each other. So you have to find some compromise – maybe to step in a bit later but reduce losses on whipsaws – this is a question of fine tuning of your system.

To be absolutely honest, you may try to create the system that will recognize specific patterns. But this task looks even harder, because the market never shows perfect patterns and even the same pattern looks different every time. Now imagine that you will have to do to specify common rules for “slightly different patterns” of entering/exiting the trade. That is easier said than done.

kamuta
10 years ago,
Registered user
Thanks Sive for your attention to forex robots - every trader had stupid losses due to emotions...

I want share very good place where kind coders give all of us free examples of Indicators and EA's code, following almost all known strategies -
MQL4 Code Base: expert advisors, custom indicators, scripts and libraries:
https://www.mql5.com/en/code/mt4

I'd like to thank all of them - studying working code is best way to learn robots coding...
G
geodepe
10 years ago,
Registered user
Typos:

A completely free forex course written by an expert bank trader and you want to complain about some minor grammatical errors? Not everyone grew up speaking, reading, and writing English. I'm sure if you would like to volunteer to go through each lesson and email a set of corrections to the FPA, the admins will probably be grateful.
G
geodepe
10 years ago,
Registered user
I am not sure why the book is posted here.
I am a PhD and thought it was under review for possible future publishing.
I meant no ill in pointing out corrections.
On the contrary, I posted so that the book would improve.
What is the point of having comments after each section?
A)To comment on the greatness/weakness of the author,
B)To comment on the content,
C)To argue (constructively) with other commentators

As far as volunteering to go through each section and present my corrections,
that is what I am doing. This is the first section I have read.

AsstModerator
10 years ago,
Registered user
OK guys. This is the army. No fighting allowed. :)

I'm the one who edits most of the lessons. If I had a full day to devote to each lesson, they would be much better. I don't have that much free time, so each ones gets a single pass cleanup. This clears out the major items. Many little Sive-isms survive the cleaning.

If the FPA ever decides to publish this in a book, I hope both of you could volunteer to do some of the editing. I'm going to need to see my eye doctor for new glasses when the last lesson is posted.

ochills
10 years ago,
Registered user
> OK guys. This is the army. No fighting allowed. :)

I'm the one who edits most of the lessons. If I had a full day to..

Hi, I think it is important that we appreciate good work and accept individual for what they are. Sive might not write good English but what is essential is the message he his trying to pass to the mind of man. As an engineer communication is much more important because it help us to ensure the structural integrity of any structure. we are not marking Sive English but rather we want to learn from his experience about the market. To me if a man is a PhD holder that does not mean he/she can not commit grammatical blunder. we know men who are an arbiter of language.
Sive Thanks.
L
Leeann
4 years ago,
Registered user
2108 and still loving this course. Thankyou!
O
One-fm
3 years ago,
Registered user
Great lesson